Ninjago Wiki
Register
Don't have an account?
Sign In
Advertisement
in: Ninjago, Ninjago: Masters of Spinjitzu, Dragons,
and 11 more
English

You may be looking for the set. For other uses of Earth Dragon, see here.

Note: The name of this article is conjectural. While an official name was technically given in set form, this page is named Elemental Earth Dragon for convenience and consistency with other articles.

Existent (when manifested)
The Elemental Earth Dragon is one of the many Elemental Dragons in Ninjago. It is a dark brown and lime green metaphysical creature that is able to be summoned at will by an Elemental Master of Earth.

Cole unlocked his dragon along with the other Elemental Masters to get back to Ninjago in order to stop the Anacondrai Cultists.

Cole used the Dragon to return to Ninjago with his friends only to find that Chen had invaded. He later used his dragon to travel to Kryptarium Prison to visit Pythor and presumably use it to leave the area.

During the pursuit of noodle trucks, Cole ordered his dragon to hunt down a truck traveling through the forest. The dragon roared, shooting bursts of energy resembling earth, and making obstacles for the truck. Soon after, Cole was able to stop the truck and defeat the driver but to his disappointment found the truck empty which fell right into Chen's plan. The discovery that so many people were going to be in danger caused Cole to lose control of his dragon and left him stranded.

Cole used his Elemental Dragon to help the other ninja capture a Fangfish that had been terrorizing a coastal village. He later used it to ride back to Wu's new tea shop, Steep Wisdom. Unfortunately, when Morro took control of Lloyd, the ninja lost their elemental abilities, and thus their dragons.

The ninja headed over to the Ninjago City Hospital for a Grant-A-Wish request to meet Lil' Nelson.

Cole rode his dragon to the Monastery of Spinjitzu.

Cole and Lloyd rode their dragons to Gypsy Cove in search of Nadakhan's ship, Misfortune's Keep. 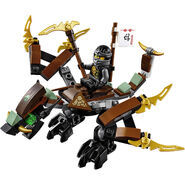 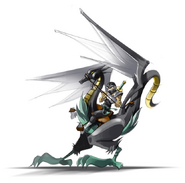