In the battle in Birchwood Forest, the Elemental Alliance went to fight the Anacondrai but were betrayed by Cole's Grandfather.

Wu told the Ninja about the Time Twins, starting with the Serpentine War and how the Elemental Masters fought back the Serpentine. Shortly after winning the War, the two Masters of Time betrayed the Alliance, leaving them with no choice but to fight back. Overpowered, Ray and Maya forged four Time Blades for the other Masters to use during their next encounter.

He watched as Wu told Maya and Ray he has a plan to defeat the Hands of Time. When Wu and Garmadon defeated the Time Twins, the Master of Ice restrained Krux.

Within a flashback to the past, he is mentioned to have visited Dr. Julien's workshop in Birchwood Forest while ill and stayed for the night.

Wu, who had been searching for the Master of Ice, inquired about him. Dr. Julien stated that he had taken a particular interest in Zane and that after he had left, Zane started acting stranger than usual. It is implied that he had passed his powers on to Zane, which is how Zane obtained his elemental power. 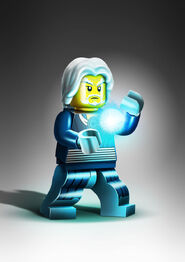 The Ice Elemental Master on the far left

When Krux used Time to pause him.

Retrieved from "https://ninjago.fandom.com/wiki/Elemental_Master_of_Ice?oldid=544106"
Community content is available under CC-BY-SA unless otherwise noted.