The Elemental Master of Shadow was a member of the Elemental Alliance. When the Serpentine broke the truce and attacked Jamanakai Village, which began the Serpentine War. She defended the village alongside the Masters of Water, Gravity, and Fire and they did a good job in holding off their foes; however, the arrival of the unbeatable Anacondrai forced them to retreat.

During a battle against the Anacondrai in Birchwood Forest, Chen manipulated the Elemental Master of Earth to turn against the other Masters, causing them to lose the battle. Eventually, they found a new way to defeat the Serpentine—through the use of the Sacred Flutes as a means of forcing the Serpentine into tombs scattered across Ninjago.

Wu told the Ninja about the Time Twins, starting with the Serpentine War and how the Elemental Masters fought back the Serpentine. Shortly after winning the War, the two Masters of Time betrayed the Alliance, leaving them with no choice but to fight back. Overpowered, Ray and Maya forged four Time Blades for the other Masters to use during their next encounter. 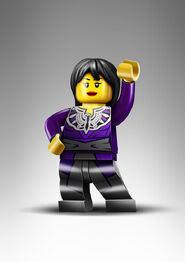 Tommy Andreasen's tweet, confirming her to be the Master of Shadow.

Retrieved from "https://ninjago.fandom.com/wiki/Elemental_Master_of_Shadow?oldid=511874"
Community content is available under CC-BY-SA unless otherwise noted.