In the Serpentine War, the Elemental Master of Sound fought the Anacondrai in the Birchwood Forest alongside the Elemental Alliance. At one point, Chen turned the Master of Earth against them.

Shortly after winning the war, the two Masters of Time, Krux and Acronix, betrayed the Alliance, leaving them with no choice but to fight back.

The Master of Sound is seen fighting the Vermillion with a bo staff. Later, he realizes they have to keep them separated so he uses a sonic scream on one of the snake warriors.

Master of Sound among the Elemental Alliance 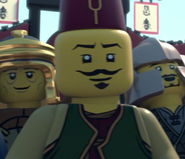 The Sound Master uses sonic shrieking.
Add a photo to this gallery
Retrieved from "https://ninjago.fandom.com/wiki/Elemental_Master_of_Sound?oldid=630079"
Community content is available under CC-BY-SA unless otherwise noted.