“You chose strangers over me?! Your Creator?! Do your duties, Samurai! You will hear from me again, when the time is near!”
— The Empire Dragon to Okino in "The Maze of the Red Dragon"

The Maze of the Red Dragon (hologram)
71713 Empire Dragon

The Empire Dragon (also known as the Unagami black dragon)[1] is a Cyber Dragon that Unagami can conjure or transform into, whenever he's angry or desires to threaten someone. It is one of three shapes/forms that Unagami has adopted inside and outside of Prime Empire.

Unagami transforms into the Empire Dragon to unleash his anger on Okino and tells him that he'll hear from him again soon.

Unagami finally opens the portal to Ninjago City, but before he could leave, he engages in a fight with Jay, who only manages to delay him for a few seconds. Due to that, Unagami transforms into the Empire Dragon. After he defeated Jay, the Empire Dragon enters Ninjago.

After entering Ninjago, Unagami, as the Empire Dragon, engages in a fight with Jay and his Blue Dragon all over Ninjago City, this leads them to the top of Borg Tower, where Unagami destroys the Blue Dragon, leaving Jay only on his feet, on top of the helipad, there the Empire Dragon prepares to defeat Jay, but after Jay manages to calm him down through understanding and compassion, Unagami returns to his normal form to finally talk with his creator, Milton Dyer.

Join Digi Lloyd and Kai in a thrilling battle against the fearsome Unagami black dragon over the skies of Prime Empire and NINJAGO® city. Watch out for the dragon’s claws and digi blade wings! Be ready to dodge its powerful stud shooters! Can the daring ninja heroes defeat the dragon, claim the Key-Tana and escape from the clutches of Unagami?[1]

When Unagami gets really angry, he conjures up his Empire Dragon (or simply turns himself into it). The big, black, beast has four clawed feet, two missile launchers on its shoulders, and a katana-sharp tail up the rear![2]

Urigami and the Empire Dragon

The Empire Dragon as a hologram 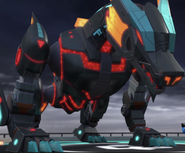 The Empire Dragon flying toward the Manifestation Gate