The Empire Temple of Madness is a floating temple located in Prime Empire. It belongs to Unagami and his army.

Join forces with Digi Jay, Lloyd and Cole as they take on Unagami at his dangerous temple in the end-game battle of Prime Empire. Watch out as you climb the treacherous tower and try to avoid the booby-traps and get past Sushimi. At the top use all three Key-Tanas to unlock the final portal for Unagami's secret chamber. The ninjas must defeat him to complete their quest![1] 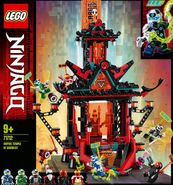 Retrieved from "https://ninjago.fandom.com/wiki/Empire_Temple_of_Madness?oldid=385764"
Community content is available under CC-BY-SA unless otherwise noted.