Not to be confused with Golden Power, another power with similar properties also used by Lloyd.

“
It's some kind of energy, or green light! I dunno, like all our Elemental Powers rolled into one! Who can say?
— Cole to Luke Cunningham in "The Oni and the Dragon"
„

Used
Energy[1] (also referred to as green power[2] or Power[3]) is an elemental essence[4] in Ninjago. It is a variation of the combinations of the original four ninja's Elemental Powers. Energy is generally associated with the color green and corresponds with the Energy Dragon.

When Lloyd returned from the Cursed Realm, he confronted Morro one last time and attacked with an Energy Blast, knocking the ghost warrior back.

After Cole wished for vengestone to make their powers stronger, Lloyd charged at some pirates until it became uncontrollable and was forced to break the chains with his power.

When the Ninja were confronting Nadakhan, Lloyd aimed at a pillar to distract Nadakhan for Kai and Cole to attack, only to fail until Jay distracted Nadakhan for Lloyd to hit Nadakhan with an Energy blast.

When entering the ice cave, Lloyd uses Energy for light. He then uses it again to power up the Titan Mech.

The symbol of Energy on some of Lloyd's gis is that of a dragon. The symbol likely represents Lloyd as one of Ninjago's protectors, just as dragons are said to protect certain objects or buildings in folktales.

The Energy symbol along with the elemental symbols of Fire, Water, Ice, Earth, and Lightning 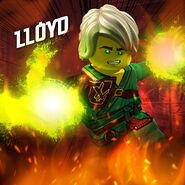 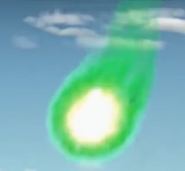 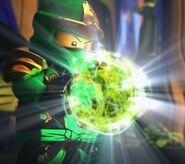 Lloyd vs. Kai in training

Lloyd preparing to fight his father once again 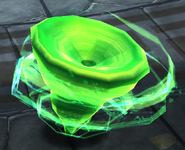