Ninjago Wiki
Register
Don't have an account?
Sign In
Advertisement
in: Ninjago: Masters of Spinjitzu, Ninjago, 2019,
and 8 more
English

Not to be confused with the episode of the same name.

“Ah, yes. Terribly sorry. I shall immediately begin the years-long reactivation process. In the meantime, however, I'm afraid I must deny entry. This club is for members only.”
— Cecil Putnam to Misako, "Riddle of the Sphinx"

The Maze of the Sphinx

The Explorer's Club (also spelled out as the Explorers' Club[1]) is a strict members-only club consisting of archaeologists managed by Cecil Putnam. To get into the club, someone must have ten thousand hours of certified exploration time. Then, they can send in an application and it will take years for the members to examine it.

Prior to Secrets of the Forbidden Spinjitzu

Decades ago, a man named Lord Belgrave attempted to enter the club by participating in a Trial By Sphinx, but failed.[2] Later on, Misako and Clutch Powers became members of the club.

When Clutch Powers discovered the pyramid in the Desert of Doom and refused to explore it, Cecil Putnam, the club's manager, called him to say that his club membership had been suspended.

When Lloyd, Nya, and Zane learned from Clutch Powers that the second Scroll of Forbidden Spinjitzu is in the club's archives, they immediately went there. Meanwhile, Smythe and Underhill listened to Percy Shippelton's adventures. The ninja wanted to take the scroll, but Cecil Putnam told them that only club members had access to the archive. When Zane unsuccessfully disguised himself as Clutch Powers with his cloak, they decided to break into the club. When they fell into the club's main room and were covered as maintenance workers, club members put on security guards. However, the ninja managed to break into the archive and find a scroll. However, they broke two terrariums with dangerous insects, which attacked the club members after they left.

Shortly after the return of the ninja and Wu from Shintaro, Misako organized a mission to confirm her theory of an uncharted island and navigate the storm belt, and went with her friend Wu, fellow archaeologist Clutch Powers, and his interns to explore the island. However, their expedition was mysteriously lost and the Explorer's Club was forced to cancel the membership of all members of the expedition.

After the expedition led by Misako was lost in the storm belt, Cecil Putnam visited the Monastery of Spinjitzu to hand over items emptied from her club locker to her family, because according to the club's rules, the membership of a member who is lost somewhere must be canceled.

Wu, Kai, Cole, Ray and Misako burst into the Explorer's Club to retrieve the Storm Amulet after learning the one on the Island of the Keepers was a fake. The ninja and Wu then attempt to answer the Sphinx's riddle to enter the club. They then interrogate Clutch Powers for the Storm Amulet. Kalmaar also broke in to acquire the Storm Amulet, and a battle pursued.

A battle between half of the ninja team and Kalmaar pursues outside of the club. A hole is broken into the front of the Explorer's Club.

Nya was standing on the roof of the Explorer's Club shortly before charging against Kalmaar and Wojira.

This members-only club is for Ninjago world’s most renowned explorers and archaeologists. It is managed by Cecil Putnam, who seems to care more about the club itself than about its members. 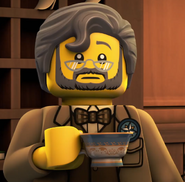 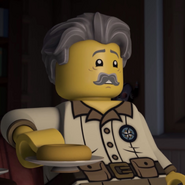 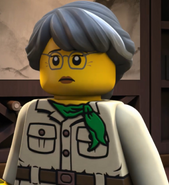 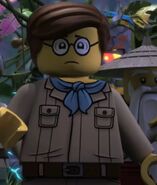 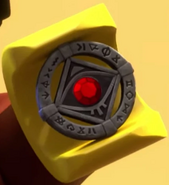 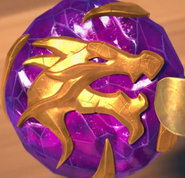 In The Maze of the Sphinx