View source
watch 01:25
Jurassic World: Dominion Dominates Fandom Wikis - The Loop
Do you like this video?
Play Sound
“But he's got a mohawk. And his name, Eyezor. It's got a real ring to it. And it's practical. You know, with his creepy sore eye and all.”
— Chope to Kapau about Eyezor, "The Forgotten Element"

Acting General of the Anacondrai Cultists

Michael Donovan
Eyezor, also known as Silvereye[1][2] and Eyezor'rai[3] in his Anacondrai form, was one of the two acting generals of the Anacondrai Cultists, who oversaw the transportation of goods from the noodle factory to Chen's Noodle House. Along with several other Cultists, Eyezor ensured the ninja's awareness of the Tournament of Elements and Zane's survival. Eyezor helped Chen to steal the Elemental Masters' powers. After the competitors rallied against Chen, Eyezor helped to complete the spell that transformed him and his allies into fake Anacondrai.

Eyezor and the other Anacondrai cultists attacked Ninjago, eventually fighting the Elemental Masters at the Corridor of Elders. When Garmadon sacrificed himself, the Anacondrai generals banished Eyezor and the cultists to the Cursed Realm. Later, Nya drowned the Preeminent, the physical manifestation of the Cursed Realm. With the realm destroyed, Eyezor died and his spirit went to the Departed Realm. Some time after his demise, a statue of Eyezor's Anacondrai form was placed in the Ninjago Museum of History.

On the Day of the Departed, Cole accidentally opened the Departed Realm and the spirits of the ninja's old enemies were released, after which they possessed their statues. Chen allied with Eyezor and Zugu and confronted Kai and Nya, who attempted to escape on their Raider Bikes. During the chase, Eyezor's Condrai Crusher crashed, sending his spirit back to the Departed Realm.

On the day before the Tournament of Elements began, Eyezor was in New Ninjago City and observed Kai defeating Kruncha at Yang Tavern. That night, he staged a robbery of Chen's Noodle House with Chope and Krait while the ninja were there. As intended, the ninja intervened and Eyezor lured them out into the back alley where they had set up Chen's invitation to the Tournament.

At midnight of the following evening, Eyezor and the other two thugs boarded Chen's ferry with the Elemental Masters and patrolled the boat with Clouse during the voyage to Chen's island.

After the ferry arrived at Chen's Island, Eyezor turned on a gramophone during the opening ceremony and watched alongside his fellow cultists as the participating Elemental Masters returned with the Jadeblades they obtained. That night, after Karlof was eliminated, Eyezor lead a group of Cultists to the Anacondrai Temple. During the ceremony, he and Zugu dragged the defeated Master of Metal before Chen, who used the Staff of Elements to remove his elemental power. Once the deed was done, they then hauled Karlof off to be put to work in the noodle factory.

Eyezor observed the first three fights in the second round of the Tournament from the audience, and would later observe the fourth fight by Chen's side alongside Clouse.

Eyezor and a group of thugs used the ferry to return to Ninjago City with the latest batch of supplies for the noodle house, while simultaneously collecting new supplies, including the now-discontinued Puffy Potstickers. The delivery went uninterrupted and the thugs returned to the island on the ferry, unaware that there were one too many noodle trucks and that there were two stowaways aboard.

The next day, a loud guitar solo began emanating from somewhere on the island and all the guards were ordered to discover the source. Investigating the waterwall alongside Kapau and Chope, Eyezor and the pair found the D.B. Express inside the small cave, with Dareth inside jamming out. When Dareth attempted to escape in the D.B. X, Eyezor pursued him in a Condrai Crusher, and managed to capture the Brown Ninja.

Eyezor helped Clouse in capturing the Elemental Masters during the next round of the Tournament. The two captured Mr. Pale and brought him before Chen, who then ordered Eyezor to lock him up with the other captured Elemental Masters.

While inspecting the outer perimeter of the palace, Eyezor discovers Krait sleeping on duty and promptly puts a stop to it. He then notices Kapau and Chope talking and orders them to be silent. He later participated in the ceremony, where he would order Kapau and Chope to join their fellow cultists in chanting after placing Lloyd in chains. He would soon witness his master drain Skylor's powers, and soon Lloyd's as well, though the transformation spell is suddenly interrupted by Skylor's betrayal, and before Eyezor could stop her, Kai kicks him aside. After Kai gains the Staff of Elements and uses it to free Lloyd and freeze Clouse, Eyezor once again attempted to attack, only to fall through a trap door triggered by Skylor.

He would somehow escape the trap door and help fight off the Elemental Masters after they crash the party. Soon after Kai destroyed the Staff of Elements, which restored everyone's powers and allowed them to defeat all of the Cultists, Eyezor escaped with Chen, Clouse, Chope, Kapau and Zugu, though not before they managed to capture Skylor, with Eyezor dragging the tied up Master of Amber.

Eyezor and Zugu repaired the one Blade-Copter they could get their hands on, and later attempted to re-capture Skylor when she escapes their hideout. The two generals pursued her in Condrai Crushers, though both crashed when Kai rammed his own Condrai Crusher into them. They were captured by Nya and taken back to the docks where they were tied up with the other Cultists. When the Cultists, along with Eyezor, were transformed into Anacondrai however, they were able to break free of their bonds and leave the island in the other blade-copters to head to Ninjago.

Eyezor and Zugu reported to Chen that the ninja and their allies have arrived in Ninjago City, much to their master's dismay as the spell had begun to wear off.

Eyezor would would join Chope and Kapau with the rest of the other Cultists in breaking into Kryptarium Prison, and fought the ninja to obtain Pythor and went back to their campsite after successfully doing so.

Eyezor would take part in Chen's invasion of Ninjago now that the ninja and their allies were separated into various areas.

While crossing through Echo Canyons, Eyezor helped carry the Roto Jet with Chen in it along with Kapau, Chope and Zugu. He would join his fellow cultists in battling the ninja and their allies at the Corridor of Elders. After Garmadon sacrificed himself by being banished to the Cursed Realm, Eyezor was banished alongside the other Anacondrai cultists to the Cursed Realm by the original Anacondrai Generals, where he would remain for the rest of eternity.

While he is not seen nor mentioned in the episode, Eyezor was present in the Cursed Realm, which is revealed to be the stomach of the Preeminent. When the Ghost Warriors free the Preeminent, they attack Stiix and its civilians. Eventually, the Preeminent went out into the Endless Sea but was knocked over by a massive tidal wave created by Nya, killing the beast. As a result, the Cursed Realm was destroyed, with most of its inhabitants being killed in the ensuing collapse of the realm, including Eyezor. With no palce left for his soul to go to, Eyezor was laid to rest in the Departed Realm.

Needing souls to distract the ninja from his plans, Yang tricked Cole into tearing an exit from the Departed Realm using the Yin Blade, allowing several souls, including Eyezor's, to escape the realm. Seeking a physical vessel, Eyezor's soul took refuge in a statue modeled after his Anacondrai likeness in the Ninjago Museum of History. Now alive in a new form, Eyezor was quickly discovered by a similarly-revived Chen, who, needing help in killing Kai and Nya to take their place amongst the living, recruited a still-loyal Eyezor and resurrected Zugu.

Taking control of a pair of decommissioned Condrai Crushers put on display, Eyezor and Zugu helped Chen ambush Kai and Nya at Ignacia, chasing the two as Eyezor pursued Nya. Ramming into Nya's Raider Bike, Eyezor attempted to topple her as he chased after the Master of Water. In the midst of the chase, Eyezor narrowly avoided the same fate as Zugu, who crash into a tree and was killed by the impact, coming after Kai and Nya on a more open plain.

Kai, unwilling to keep fleeing, leapt off of Nya's bike and confronted Eyezor head-on. Accepting the challenge, Eyezor slammed his Condrai Crusher towards Kai, only for the Fire Ninja to summon a Spinjitzu tornado, sending Eyezor veering off-course and into a nearby tree, crashing. His mannequin body was unable to sustain the damage so as a result, his soul gets sent back to the Departed Realm.

Eyezor briefly appears at the beginning of the Ninjago level, "Elements of Surprise." He is battling Jacob Pevsner at the arena and is about to claim victory when Gandalf, Wyldstyle, and Batman fall out of a portal and topple him, knocking him out. Eyezor is then carried away by two Anacondrai cultists.

As a human, Eyezor was somewhat handicapped by his blinded eye, although made up for it in his intelligence, strength, and combat prowess, feats that earned him his status as one of Chen's personal commanders. Armed with an Anacondrai Blade, one of the sharpest blades in existence, Eyezor was able to cut through virtually anything.

Following his transformation into an Anacondrai, Eyezor gained the abilities of the tribe, including massive strength, incredible speed and reflexes, invisibility, and scales durable enough to withstand fire. After being cursed, Eyezor lost these abilities.

After being resurrected in the body of a statue, Eyezor lost the need to eat, sleep, etc., in order to live. However, his new body, due to not being designed for combat, was fragile, thus allowing him to die in a crash.

A brutish and aggressive Cultist, Eyezor was amongst Chen's rudest commanders, frequently yelling at lesser soldiers to continue on with their tasks. Likewise, he was especially exasperated with Kapau and Chope, regarding them as idiotic and lazy. When not angered, Eyezor was often smug and confident, approaching the ninja with a cocky smile and knowing full and well his role in the plan. In combat, Eyezor was a ruthless and determined opponent, although not one to accept defeat with grace.

His name is a reference to his missing eye as well a pun on "eyesore." 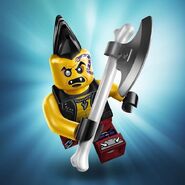 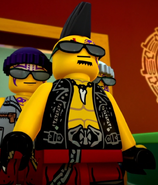 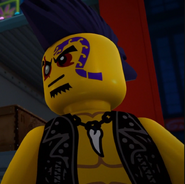 During a noodle delivery

Yelling at a sleeping Krait

The undead Eyezor as a statue 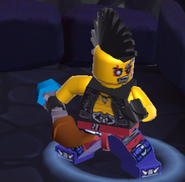 In Tournament (as Silvereye) 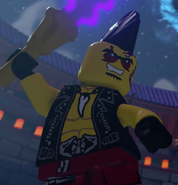