Ninjago Wiki
Register
Don't have an account?
Sign In
Advertisement
in: Ninjago: Masters of Spinjitzu, 2012, 2014,
and 31 more
English

View source
watch 01:25
Jurassic World: Dominion Dominates Fandom Wikis - The Loop
Do you like this video?
Play Sound
“I can't explain it, but I feel a strange connection with the Falcon. I think he's trying to help show us the path we need to take.”
— Zane to the other ninja, Nya and Wu, Home

The Quiet One (pictured)
70639 Street Race of Snake Jaguar

Paul Dobson
The Falcon is a robot created by Dr. Julien. It initially appears to be a simple bird of prey, but quickly forms a bond with Zane, leading him and the other ninja to new discoveries.

Later on, the Falcon is revealed to be a robot, created by Dr. Julien as a companion for Zane, who was a robot himself. From then on, the Falcon became a direct ally of the ninja, serving as Zane's pet and a long-range scout.

Sometime after the Second Serpentine War, the Falcon was updated to have a shiny titanium exterior, to match Zane's Titanium Ninja form. It was eventually updated even further, now with an even more robotic but still bird-like body.

When Zane infiltrated the Sons of Garmadon, Nya redesigned the Falcon to have a more drone-like appearance and installed it into the front of Zane's bike.

Zane's bike was driven off a cliff and presumably destroyed during his race through the Teeth, leaving the Falcon's fate unknown.

Decades ago, Dr. Julien built a robotic Falcon as a companion for himself and his son Zane in his hidden workshop in the Birchwood Forest. When Dr. Julien died and Zane left, the Falcon flew away and began living like an ordinary bird until one day he found Zane in front of the Monastery of Spinjitzu.

When the Falcon found Zane near the monastery, it perched on a tree near the dumpster outback. It copied Zane's movements when he came to take out the trash before flying off. Intrigued by the strange bird, Zane followed the Falcon, allowing the mysterious bird to lead him to Lloyd's treehouse fortress in Wildwood Forest.

When the ninja arrived at the fortress the next morning, they questioned Zane on how he found Lloyd's new base. They were skeptical when Zane explained that he had followed a bird; Jay jokingly asked if it was "a cuckoo bird," but Zane missed the joke, noting that cuckoos were not native to the forest.

After the monastery was burned down, Zane noticed the Falcon once again while his comrades berated him for leaving their home unguarded. Riding his dragon, Shard, he followed the bird to the Sea of Sand, where he discovered the Destiny's Bounty.

The Falcon appeared in Zane's dreams one night, where it spoke to him from its perch on a powerline. Near the end of the dream, it perched on the Green Ninja's arm, leading Zane to believe that he was destined to become the legendary warrior for he was the one to have seen the falcon.

While the ninja were putting up signs in Jamanakai Village, Zane spotted the Falcon and convinced his friends to help him follow it. The Falcon led them through different terrain, with each ninja tiring out and telling the others to go on without them. By the time the bird reached Birchwood Forest, Zane and Kai were the only ones left, and the latter offered to wait for the others at the edge of the forest while he caught his breath. Zane continued to follow the Falcon until it dropped to the ground and began sparking, revealing its robotic nature. As a bewildered Zane picked up the mechanical bird, he noticed a strange symbol on its back.

After fending off the Juggernaut, Zane discovered the same symbol carved into a large birch tree. The symbol marked the doorway of the hidden workshop, where Zane found the Falcon's blueprints and used them to repair his robotic friend. As the Falcon flew into the depths of the workshop, Zane also discovered his own blueprints, realizing that he was also a robot. After he viewed his memories via his memory switch (including some of Dr. Julien creating the Falcon), Zane came to terms with his true nature, and the Falcon briefly perched on his arm as he regained his resolve.

Zane says that the Falcon is programmed to alert them if he found something interesting, which shocks Master Wu when he hears "programmed".

Later, the Falcon spotted the Serpentine and Lloyd who was still a prisoner, and they were approaching the Fire Temple.

While the ninja were training for the Serpentine attack, Zane demonstrated his use of Falcon Vision as a counter to the special ability of the Venomari. The Falcon accompanied Zane and the others to Serpentine's underground fortress, circling high above the battle. When Zane was sprayed with Venomari venom, he engaged Falcon Vision to circumvent the hallucinatory effects, allowing him to battle the Serpentine normally.

The Falcon arrived at the Destiny's Bounty with footage of the Serpentine in the City of Ouroboros.

When strong earthquakes sent Ninjago City into a state of panic, Zane sent the Falcon into the city to scout for danger. During its patrol, the mechanical bird spotted a Stone Swordsman wandering around the city, heralding a full-scale invasion of the indestructible warriors. The Falcon retreated to the Destiny's Bounty as the ninja and the citizens fled the overrun city.

Zane was worried about the Falcon as he had not heard from it in a while, though suddenly his Falcon Vision activated, and he rushed to the bridge and connected his vision to the screen in order to show the ninja as well.

When the ninja arrived at the edge of Lord Garmadon's camp to search for the Temple of Light, Zane spotted his Falcon in one of the enclosures. Despite the risk to himself and their mission, he snuck into the camp and retrieved it. He was spotted after grabbing the Falcon, but he and the other ninja narrowly escaped with the mechanical bird in tow.

Dr. Julien began repairing the Falcon after it was returned to him, continuing to work on it after the ninja successfully enhanced their powers at the Temple of Light. The mechanical bird was functional once again by the time the ninja and Misako attempted to steal the Helmet of Shadows from Lord Garmadon. It observed their progress and alerted Nya when their cover was blown, allowing her to drive the Earth Driller to the camp in time to evacuate her allies.

When the ninja and their allies charged Lord Garmadon's camp, the Falcon flew ahead to scout the area. After the heroes realized that the camp was abandoned, the Falcon led them to a broken section of the wall, where massive tread marks and a path of destruction in the forest indicated that the Garmatron had left for the coast.

Following the Overlord's escape to Ninjago City, the Falcon led the ninja to the Temple of Light, where they discovered the Golden Mech. It is unknown what happened to the Falcon afterward, but it seems to have remained on the Island of Darkness while the ninja set off to confront the Overlord.

When Lloyd and Garmadon went to the Samurai X Cave, the Falcon led them there, as he was the only one other than Nya to know where the cave was.

Wanting to inform Lloyd and his father about a discovery, the ninja and Nya sent the Falcon to deliver the message.

When Pythor ate the shrinking pill, the Falcon chased after him. Later, at Zane's funeral, the Falcon perched on the shoulder of Zane's statue.

As Kai visits Zane's statue, the Falcon perched on the statue's shoulder, scaring off the other birds.

The Falcon follows Nya and gives out the location of Zane.

The falcon appears during the video communication between Nya, Wu, and Misako. The Falcon taps on the screen with its beak when Nya doesn't mention it in the conversation before she laughs and corrects herself by mentioning it.

The ninja return to the Samurai X Cave where the falcon is reunited with Zane who happily greets his old friend. The falcon soon gives the ninja a hint on how to defeat Chen's army of Anacondrai which causes them to visit Pythor at Kryptarium Prison.

The Falcon was at one point updated into a retractable titanium bird that could be stowed within the hand of Zane's titanium body. He was dispatched by Zane to inform Misako of their location and summon her to decipher the secret message on Wu's staff.

The falcon was placed in the grandfather clock and used to play a prank on Cole, who began showing signs of being nervous.

The Falcon was used to show the ninja the three symbols of the First Spinjitzu Master's staff.

Later, the Falcon projected Ronin's recording telling the ninja where the Tomb is located, unaware he's in possession of Morro.

Zane sends the Falcon to keep an eye on Nadakhan but Monkey Wretch finds it and Nadakhan instructs him to dismantle it.

Nya redesigned the Falcon into a larger, drone-like design, and installed it into Zane's new bike, which he used to chase the Sons of Garmadon. Zane used the Falcon to give his bike limited flight capabilities and to shoot at the Oni Bike. It's unknown what happened to the Falcon after this or if it survived Zane's bike driving off a cliff.

When the Dragon Hunters have the stranded ninja and Faith tied up, Kai mistook a Bonepicker's shadow for the Falcon.

In its original appearance, it was a dark purple falcon-like bird robot with a yellow beak, metallic legs, and yellow eyes.

After the Second Serpentine War, it was redesigned and his feathers were turned into a titanium skin, to more resemble Zane's titanium appearance.

One year after Wu got lost in time, the Falcon was redesigned again by Nya, to be a larger, white and blue drone placed on Zane's Snake Bike.

The Falcon in set form 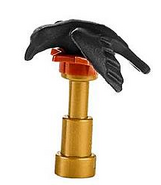 The Falcon drone in set form

On Zane's arm in a drawing by Tommy Andreasen

On the Green Ninja's arm

Revealed to be a robot

As a drone on the Snake Bike