View source
watch 01:25
Jurassic World: Dominion Dominates Fandom Wikis - The Loop
Do you like this video?
Play Sound
“Let's just say we Fangpyre bite off more than we can chew.”
— Fangtom to Lloyd, "Snakebit"

The Fangpyre and their fellow Serpentine made the tomb their home until the ninja discovered them, at which point the Nindroid crisis had begun. The Serpentine opted to avoid the struggle, but would later help evacuate Ninjago's citizens after the Golden Master began attacking the city. Following his defeat, the Fangpyre and the other tribes returned to the surface, living in Ninjago alongside its people. When the Second Serpentine War commenced, they fought in the climactic battle at the Corridor of Elders.

Their body markings are red and white. Some of the Warriors and Generals have two heads. They have especially long, thin fangs.

The Fangpyre's graveyard tomb is located in the Cemetery of Souls. It was used by the Serpentine to hide from the Great Devourer and is a playable arena in the LEGO Ninjago: Rise of the Snakes app.

Red is a warning sign, so watch out for the bright-red markings of the Fangpyre tribe! A poisonous bite from a Fangpyre can turn anything or anyone into a snake. Always hungry, Fang-Suei bites anything he can find. He turns many machines into snakelike vehicles for his tribe. 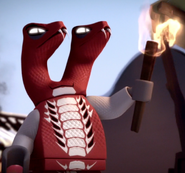 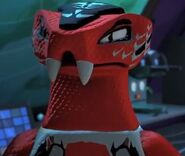 A Fangpyre skeleton in Crashcourse Canyon