The Fangpyre Bite is the special, signature ability of the Fangpyre tribe. By injecting their venom into objects or living organisms, the Fangpyre can transform their victims into Serpentine, although the exact effects vary with the target. It appears similar to the Great Devourer's venom in coloring.

Although the Fangpyre are, on average, one of the stronger sub species of Serpentine, they are also one of the smallest tribes (either naturally or due to losses suffered before or during their imprisonment). To compensate for this, Fangpyre can secrete a light green venom from their fangs that can imbue snakelike features into anything it is injected into. The Fangpyre themselves have a unique reaction to their own venom; if a Fangpyre bites itself or is bitten by another Fangpyre, its head will separate into a pair of smaller heads with elongated necks (resembling less extreme versions of the Pythor's head).

Vehicles and inanimate objects bitten by the Fangpyre immediately transform into Serpentine Vehicles, gaining snake-like features and a biomechanical appearance. The state of the object prior to infection appears to be irrelevant, as the Fangpyre have been seen transforming scrapped vehicles and completely inanimate sculptures into fully functional vehicles and robots.

The effects of a Fangpyre Bite on living organisms appears dependent on the victim's complexity; smaller creatures (such as flies) are transformed almost immediately, while larger, more complex organisms such as humans transform very gradually. The first signs of infection are usually a pair of small fangs and a forked tongue developing within the victim's mouth, along with a tendency to draw out S sounds into long hissing noises. As the transformation progresses, victims begin to develop scales on their skin, small tails, and a noticeable green tint all over their bodies (including their hair and clothing).

It is unclear whether a Fangpyre's Bite would transform a human victim into a Serpentine or an actual snake if allowed to run its course. Likewise, the effects of Fangpyre venom on other Serpentine is unknown, as are the results of injecting the venom into a Fangpyre that already has two heads.

Similarly to the bite of the Great Devourer, the Fangpyre Bite changes the appearance of an individual gradually, and in a slightly unappealing way.

The Fangpyre ambush Ed & Edna's Scrap N Junk, biting Ed and Edna as well as vehicles around the junkyard.

After the Ninja force the Fangpyre to retreat, Jay retrieves the Fangpyre Staff, and Nya uses the anti-venom in the staff as an elixir to cure Ed and Edna and turn them back to normal.

When Jay invites Nya on a date to the Mega Monster Amusement Park, she agrees. However, Jay accidentally pricks his hand on the fang of the Fangpyre skeleton they had discovered earlier.

While on their date, Jay realizes that he had gained fangs and a tail. He was also beginning to experience speech problems. He rushes to the bathroom to gather the courage to tell Nya, making her wait in the restaurant. Unfortunately, both are forced to jump into action when Serpentine activity is detected at the amusement park.

Later, when Jay and Nya are trapped on a roller-coaster, upon seeing the dead end up ahead Jay attempts to call the Samurai for help. Nya reveals that she is the Samurai, and after telling him that he should not go out of his way to impress her, she kisses him on the cheek, which raises his heart rate and cures him of the infection.

When Pythor P. Chumsworth retrieved the Fangblades from the Ninja, the Serpentine hijacked a large tour bus to make their escape. Upon realizing that the Ninja were in pursuit, Pythor ordered his forces to prepare for battle—to this end, several Fangpyres bit the bus, transforming it into the Serpentine Train.

Edna showing the early effects of the Fangpyre's Bite

Edna and Ed (in late-stage Fangpyre's Bite transformation) being offered a cure by Nya. 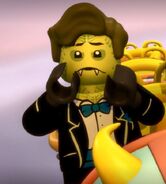 Jay infected by the venom from a Fangpyre skull's tooth.

Add a photo to this gallery
Retrieved from "https://ninjago.fandom.com/wiki/Fangpyre_Bite?oldid=394173"
Community content is available under CC-BY-SA unless otherwise noted.