Ninjago Wiki
Register
Don't have an account?
Sign In
Advertisement
in: Ninjago, Ninjago: Masters of Spinjitzu, Serpentine,
and 9 more
English

This is about the Serpentine vehicle. For the set, see here.

“
Can you believe the Fangpyres had an evil wrecking ball? How could a wrecking ball be evil?
— Jay in "Vehicles and Mechs"
„

The Fangpyre Wrecking Ball is one of the bigger Serpentine machines, a large crane with a semi-sentient wrecking ball.

It was originally created by Ed and Edna, but the Fangpyre bit it at Ed & Edna's Scrap N Junk and now it is a Serpentine vehicle.

Jay boarded it and discovered that its control console is a smaller snake-head - nonetheless, he managed to commandeer the crane against a Fangpyre Robot infected with Fangpyre venom.

The Fangpyre Wrecking Ball was being used by the Fangpyre when they were about to confront the Hypnobrai. 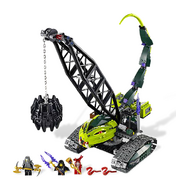