View source
watch 02:56
Doctor Strange in The Multiverse o Madness - The Loop
Do you like this video?
Play Sound
“It'll be... our pleasure.”
— Fangtom to Lloyd, "Snakebit"

Mackenzie Gray
Scott McNeil (Episode 30)
Fangtom is the Serpentine General of the Fangpyre tribe. He was previously friends with Skales before being sealed away in the tombs initially. He has two heads, which take turns talking and finishing sentences—the left head speaks with a high voice, and the right head speaks with a deep voice.

At an unknown point of his life presumably in combat, Fangtom accidentally bit himself, and his own venom horribly mutated him, giving him an additional head.

At some point, Fangtom became good friends with Skales, a warrior from the Hypnobrai tribe.[1]

Near the end of the Serpentine Wars, the Elemental Alliance found Fangtom and the other Fangpyre and used a Sacred Flute to lock themvin their tomb.[2]

While the Fangpyre were locked in their tomb, Fangtom challenged the former general of his tribe to a duel, winning and becoming the new general of the Fangpyre tribe.[3]

Fangtom and his tribe were freed from the Fangpyre Tomb by Lloyd Garmadon, who explained that he was seeking vengeance on the Hypnobrai tribe after they betrayed him. Fangtom agreed to the plan but mentioned that his tribe was few in numbers and that they would need reinforcements. Fangtom and his army then went to Ed & Edna's Scrap N Junk, turning the items of the junkyard into Fangpyre vehicles as Ed and Edna watched in horror. The General revealed his intentions of building an army before his forces bit Ed and Edna as well.

When the ninja arrived the next morning, Fangtom oversaw his tribe's attack against them. When the battle turned in the ninja's favor, Lloyd called a retreat, with Fangtom joining him on the platform of a Rattlecopter. The ninja gave chase in their new vehicles, and Jay managed to snatch the Fangpyre Staff out of Fangtom's hands. The General immediately ordered the rest of his forces to attack and reclaim his staff, but the ninja fled aboard the Destiny's Bounty.

Fortunately for Fangtom, Nya accidentally dropped the staff out the back of the ship, where it bounced off of Fang-Suei's head. As Fangtom retrieved his staff, he snarled that the ninja had to be stopped, and a dust-choked Lloyd weakly agreed.

Despite their recent defeat, the Fangpyre had successfully built up their forces enough to helped Lloyd attack the Hypnobrai. Fangtom sat atop the Fangpyre Wrecking Ball as his tribe rolled into the Frozen Wasteland, but called off his attack when he saw Skales leading the Hypnobrai. The two Generals welcomed each other's company, revealing that they had been great friends before being sealed away, and Skales expressed relief that Fangtom's tribe had been released instead of the others.

As Lloyd spluttered in fury and shock, Fangtom asked Skales what they should do with Lloyd, asking if Skales could hypnotize the would-be evil overlord, making him act like a pig. After Skales shot down that suggestion on the grounds of Lloyd being useless as a fighter, Fangtom decided to turn Lloyd into a snake with his bite. When the Serpentine turned back to the wrecking ball, however, Lloyd was nowhere to be seen, having fled when he realized that the Fangpyre had betrayed him.

Fangtom was summoned to the newly-uncovered City of Ouroboros by Pythor, along with the rest of the Serpentine. Once there, Fangtom found himself and his fellow Generals challenged to a Slither Pit by Pythor, with the stipulation that the Serpentine would submit to the latter's leadership if he successfully defeated the other four Generals simultaneously. Fangtom suffered a tail whip to the head early on but managed to help Acidicus and Skalidor pin Pythor down.

Consequently, the three Generals missed Skales handing the Sacred Flute to Pythor, who used it to leave the other Serpentine leaders immobile with pain. With his opponents thus incapacitated, Pythor easily defeated the Generals, with Fangtom getting punched in both heads as Pythor snatched away his staff. With the five staffs in his possession, Pythor declared himself to be the supreme master of the Serpentine, and Fangtom joined the others in bowing before the new Snake King.

In order to prevent the ninja from interfering in the search for the final Fangblade, the Serpentine dug a complex network of tunnels between the five tombs, with the Constrictai Tomb being enlarged into a massive underground fortress. While Pythor searched for the Fangblade, Fangtom remained in the fortress—along with his fellow Generals and most of the other Serpentine—in order to protect the three Fangblades they had already collected.

When the ninja infiltrated the fortress to try and steal the three collected Fangblades, Fangtom was discussing the legend of the Great Devourer with Acidicus and Skalidor. He wondered if the beast would really consume everything once unleashed, but the discussion was interrupted by Skales's reminder to stay alert for Pythor's return. When the ninja were spotted, Fangtom slithered into battle, only to find that Jay's metal armor was too tough for his fangs to pierce. Luckily, a cage trap at the base of the fortress caught the ninja before they could grab the Fangblades.

After the Great Devourer was released, the Serpentine were forced back underground into the tombs to avoid being eaten. Fangtom blamed Skales for the release of the Great Devourer telling him that he (being Pythor's second-in-command) should have known Pythor's plan was terrible. Skales simply said: "How was I supposed to know he was mad!" Fangtom tells Skales that he was Pythor's right-hand man. And Skales should've known better. And now the Devourer will eat them all. The Devourer approaches them. Everyone screams and rushes into the Tomb. As Skales, and Fangtom rush into the hatch to the tomb, he called Fangtom a coward, which made Fangtom to call Skales the coward back.

Fangtom watched as Skales tried to lead the Serpentine as the Snake King. However, he was left alone with the other Generals as Garmadon lead them, instead.

After discussing how to win back their Serpentine, the Fangtom, Acidicus, and Skalidor robbed the bank and headed toward the subway. There, they fought the ninja while also revealing it’s just a ruse to distract the ninja while Skales kidnaps Lloyd. They escaped when they had the chance.

Fangtom and the other remaining generals soon joined up with Lord Garmadon who presented them with his new Mega Weapon, though the Fangpyre doubted that Garmadon knew how to use the weapon. Garmadon eventually did figure out how to used it and inadvertently brought Captain Soto's crew back, who in turn took over the ship and threw Fangtom and the other serpentine into the brig. After the ninja dealt with the Pirates, the Serpentine reclaimed the ship and Fangtom stood by Garmadon as he mocked the ninja.

After breaking Skales out of jail, Fangtom drove with the Serpentine Generals in the Ninjaball Run race.

Fangtom and the other Serpentine follow Skales to the Museum. Later, they find Garmadon, who explained he will revive the Grundle. After they thought the plan failed, he helped steal a golden sarcophagus but was unable to stash it in a manhole.

Seeing Garmadon in the City of Ouroboros, the Serpentine Generals went to ask him what brought him here. Garmadon explained to them they could find the Dark Island and rule Ninjago together. All the Generals, except Skales, agreed.

During Skales' coronation, Fangtom gives him a crown and was shooed offstage. When he and the other Serpentine find the tomb of the Stone Army, they fought the army but were trapped inside.

Fangtom was practing how behave politely with Lasha while he was inside the Stone Army's former tomb.

Rank: General of the Fangpyre Tribe

Fangtom is the General and brains behind the Fangpyre tribe. As the (double) head of a strong but fairly small tribe, Fangtom’s best bet is to use the Fangpyres’ greatest strength to create reinforcement: their venom can transform anyone or anything into a snake. Once Fangtom accidentally bit himself, which is why he now has two heads that finish each other’s sentences. You might say he bit off more than he could chew...[link unavailable]

Fangtom is the Fangpyre tribe's general. He accidentally bit himself when he was trying to turn one of his victims into a snake, and his poison caused his head to form two smaller heads. Two heads are definitely better than one for Fangtom. He is the brains of the tribe and can cause double the trouble for the ninja! 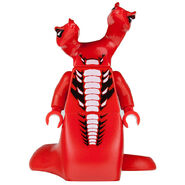 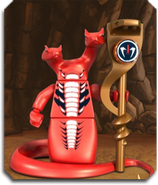 In a promo video

Sneaking up on the Green Ninja in a set commercial

Fangtom after being released from his tomb

On the Tomb of the Fangpyre book cover 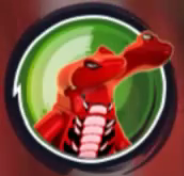 In an image for a German online game