View source
watch 02:56
Doctor Strange in The Multiverse o Madness - The Loop
Do you like this video?
Play Sound
“Give me food and I will live. Give me water and I will die. Who am I?”
— The Sphinx's riddle referring to Fire, Riddle of the Sphinx

Used
Fire is one of the four main elements of Creation. This element corresponds with the Sword of Fire, the Fire Dragon, and the Elemental Fire Dragon, and is generally associated with the colors red, orange, and occasionally yellow. Masters of Fire usually have been seen creating fire using their hands, but they can manipulate fire from existing sources.

During the first Serpentine War, the current Elemental Master of Fire, Ray, shot multiple fireballs at the Anacondrai during their battle in Jamanakai Village.

While falling from Chen's blimp, Kai used fire to propel himself towards a parachute, ensuring a safe landing on the island after a little time.

He later ignited his hand with fire after hearing something in the nearby bushes, but subsequently extinguished it after finding it was just Skylor. After she was revealed to be Chen's spy and daughter, Chen appeared and Kai used his fire to melt the ice they were standing on before attempting to escape only for Chen to capture him.

When Kai was brought before Chen with the captured masters, the latter used his Staff of Elements to steal Kai's power. However, Chen was convinced by Skylor to spare Kai and he allowed it to know of her feelings for him. While Chen was showing Kai his collection, he noted that even without his power the fire still burned within him after he remained defiant towards him. After helping Chen capture Lloyd, Kai revealed his true intention was to get close and destroy the staff which he was able to do when his allies appear returning the element to him.

When the Sons of Garmadon—including Mr. E and Ultra Violet—infiltrate the Royal Palace, the Ninja surround Mr. E as he is about to retrieve the Mask of Deception. However, the latter uses the Mask of Vengeance and gains four arms in the process. Nya uses her Water powers and Kai uses his Fire powers (although he only manipulates the fire still burning in the palace); however, they do no harm. Jay and Cole use their powers—Lightning and Earth—but the Ninja are then overpowered. Mr. E shatters the casing and retrieves the Mask of Deception. Kai manipulates the fire still burning in the palace and throws the fireball at Mr. E, who unintentionally uses the Mask of Deception as a shield; thus, the mask is burnt, though it is revealed that it was a fake, mentioned later by Hutchins.

When the Ninja inadvertently freed Aspheera and attack with their Elemental Powers, she becomes interested in Kai's, and absorbs it, turning gold and renders Kai unconscious.

When the Hearth Fire was put out, Kai tries his best to recover his power before he eventually does, lighting up the Fire, and is proclaimed Fire Maker as a result.

Even though he slowly recovers them, Kai uses his firepower to cook some fish for some kids.

The kids come up to Kai for him to use his firepower to cook fish, which he does so before Boreal arrives. He tries to defend the village as best as he can, but since his powers were still weak, even trying to conjure a fire shield, he fails.

After regaining consciousness his fight with Boreal which wasn't enough, Kai gets angry, which results in his powers fully recovering, and uses them to destroy the Ice Dragon.

Via the users' True Potential

The symbol of Fire (as seen on some of Kai's gis) is the head of a lion, with its mane being made of flames. This likely represents Kai's anger being equal to that of a lion.

The fire symbol along with the elemental symbols of Energy, Water, Ice, Earth, and Lightning

The Sword of Fire

Kai using Fire for the first time without any objects in "Codename: Arcturus"

Kai using his fire to fly.

Skylor using the power of Fire

In Kai's "Meet the Ninja" video

Ray using his fire and Maya using her water against Acronix

The power of Fire and Water combining into the Dragon Blade

The Elemental Fusion Dragon of Fire and Water 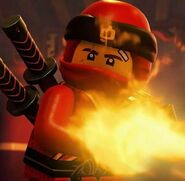 Heating up the hot tub

Kai regains his powers and earns the name, Fire Maker.

Kai about to cook some kids' fish

Boreal disintegrates due to the power of fire. 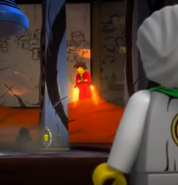 Kai with the Obsidian Sword