Ninjago Wiki
Register
Don't have an account?
Sign In
Advertisement
in: Ninjago, Ninjago: Masters of Spinjitzu, Secrets of the Forbidden Spinjitzu,
and 11 more
English

“Fire Fang, to me. Lead me to the Treacherous Deceiver. Find him, Fire Fang!”
— Aspheera to Fire Fang, "Ancient History"

Unknown
Fire Fang is a giant snake used by the Pyro Vipers. After Aspheera used Kai's powers to conjure Fire Fang, Fire Fang took Aspheera to Ninjago City. When Aspheera got the Forbidden Scroll, Fire Fang smelled the scent of Wu and found him at the Monastery.

While Zane was dreaming, he had a vision of Fire Fang marching towards Ninjago City.

While inside Beohernie's belly, Zane saw another vision of Fire Fang coming out of the pyramid.

When Aspheera caused the pyramid to erupt, it conjured up Fire Fang. She then commanded the giant beast to take her to Ninjago City.

When Gayle Gossip decided to follow one of the Elemental Cobras, they find Fire Fang and saw that more Elemental Cobras are surrounding Aspheera who demands them to find the "Treacherous Deceiver."

In order to obtain the Scroll of Forbidden Spinjitzu, Aspheera is seen riding Fire Fang to the Ninjago Museum of History along with Gayle Gossip, Vinny, and many Elemental Cobras.

After obtaining the Scroll of Forbidden Spinjitzu, Fire Fang used the Scroll in order to find the Treacherous Deceiver's scent. After finding his scent, Aspheera rides Fire Fang to find him.

When Nya arrives to stop Aspheera, Fire Fang fights back by spewing fire while Nya uses her Elemental Powers. While this is going on, Lloyd hops onto the Aspheera's Fire Fang and kicks her staff out of her hand. Lloyd and Aspheera snatched the staff at the same time, but Aspheera uses Spinjitzu to defeat Lloyd. With the plan failing, Nya and Lloyd are surrounded by the Pyro Vipers, but Zane bails them out when he arrives in his ShuriCopter.

Fire Fang headed towards the Monastery while spewing fireballs at ninja and Wu. When they arrive, Aspheera takes out the Monastery's defenses while Fire Fang destroyed the door, causing the ninja and Wu to flee to the hangar bay.

Join Kai FS in NINJAGO® world for a thrilling ninja battle against Serpentine sorceress Aspheera’s huge, fire-spitting snake, Fire Fang! Watch out for Fire Fang’s swiping, rattling tail. Dodge its stud shooters and spin into a snake fight against the Pyro Viper with Kai's ninja tornado spinner. Can you get to Aspheera on her throne and take back the powerful Scroll of Forbidden Spinjitzu?[1] 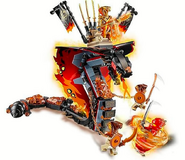 Fire Fang coming out of the pyramid

Concept art of Fire Fang and an Elemental Cobra