Not to be confused with the episode or the set.

“Firstbourne is the mother of all dragons. Said to be the most powerful in the realm. No one's ever seen it entirely, but it is said to possess every element of her beloved spawn.”
— Jet Jack to "Rocky Dangerbuff", "Radio Free Ninjago"

How to Build a Dragon
70653 Firstbourne

All dragons
The Firstbourne is the first dragon in existence and the legendary "mother of all dragons." She inhabits the Realm of Oni and Dragons and lives in her nest most of the time. Ages ago, the First Spinjitzu Master befriended the Firstbourne, and with her help, he forged the Dragon Armor. The Firstbourne protected her dragons over the years, primarily from Iron Baron and his barbaric Hunters.

When the Oni began to invade the realms, with Faith, she travelled to the realm of Ninjago to warn the ninja.

Much later, Iron Baron attempted to hunt for her, but she took his leg and arm as a result. But at the same time, Iron Baron was able to take the Dragonbone Blade from her. Since then, Baron has nursed a vendetta against the Firstbourne and leads his Hunters in searching for it to get revenge.

During the ninjas' captivity, Jay remembers what Wu told him the first time he met him and decide to make a mech that looks like a dragon, which the Hunters will believe is the Firstbourne to help out. Over the next few days, Cole and Wu build the dragon with parts smuggled out by hiding them in Dragon dung and get them before disposing of it.

Later that night, Wu flew the Dragon mech before a shot from Iron Baron knocks the tail off and the real Firstbourne appeared to rescue her children. The ninja initially confused her for their mech until they realize the truth and were shocked to see it up close.

As she was firing among the camp, Wu and the ninja provide a distraction for Kai to free the dragons before they get out themselves. Iron Baron yelled that the dragon was punishing them for hunting its offspring. The freed Dragons then flew to their mother and were able to escape the Hunters.

Iron Baron forced Wu to lead him to Firstbourne's nest, where the sacred Dragon Armor is guarded. Eventually, the arrival in the nest and locate the armor. Iron Baron rushes to procure it, and does so just as the Firstbourne awakens and rises up before him. Baron hastily throws on the armor and commands the Firstbourne to kill Wu. However, Wu discloses that he lied about the armor having control over the Firstbourne, and revealed that she instead sensed the good in his father's heart, which allowed him to tame her.

Upon sensing the evil in Iron Baron, who rips the armor off, the Firstbourne unleashes a stream of molten rock and encases him in it. Firstbourne notices Wu and senses the good in his heart as it did with his father. Wu soon puts on the armor and allies with the Firstbourne and her family of dragons. He flies the Firstbourne out of the nest and reunites with the ninja and Dragon Hunters. After the ninja board dragons of their own, they fly off to return to Ninjago.

The ninja fly back into Ninjago through a rift in the sky, with Wu leading upon the Firstbourne. They went down to where Lloyd, Nya, and Dareth were fighting the Sons of Garmadon and sent the bikers fleeing away. After the team evacuated the people in the surrounding areas, Wu and Lloyd flew the Firstbourne up to Borg Tower, where they confronted Lord Garmadon. The three began fighting, with the Firstbourne eventually intervening and unleashing a stream of molten rock. Garmadon was incapacitated, but broke free and unleashed a burst of destructive energy. Wu was sent flying towards the streets far below and was saved by the Firstbourne.

As Lloyd continued fighting his father, Wu flew the Firstbourne over to the Colossus and helped the ninja and their dragons to defeat it. After the successful battle to overthrow Garmadon and his forces, Wu said his "goodbyes" to the Firstbourne, as she and the other four dragons would soon return to the Realm of Oni and Dragons itself.

The First Realm was attacked by the Oni and Firstbourne barely managed to escape with Faith. They traveled to Ninjago and fell unconscious. Wu helped them get better and Faith told Wu about the Oni invasion.

Faith told Wu and Misako about what happened in the Realm of Oni and Dragons. The Oni attacked the realm and the Hunters try to defend themselves with the help of the dragons, but only Faith and Firstbourne managed to escape.

After the ninja were victorious, Firstbourne is fully healed and flew above the monastery as the ninja and their allies celebrate.

Firstbourne's name is based on the term "firstborn," as she was the first dragon. Her title "mother of all dragons" is probably based on the same title used by Daenerys Targaryen in Game of Thrones. 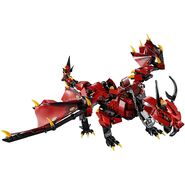 Firstbourne as she appears behind Iron Baron in the Hunted mural

On the storyboard for "Green Destiny"

Firstbourne behind Iron Baron in the Season 10 opening

Firstbourne visualized, behind Morro, Nadakhan and Garmadon in his Oni form.