For other uses of Fire Dragon, see here.

“Once he realized we were trying to protect the Sword of Fire, he actually became quite a softie.”
— Kai, "Weapons of Destiny"

Guardian of the Sword of Fire (formerly)

Deceased
Flame was the Fire Dragon Guardian of the Sword of Fire and previously Kai's pet.

After fusing with the other three dragons to form the Ultra Dragon, Flame was eventually captured and killed by Dragon Hunters, and his skeletal remains were made into the base of Iron Baron's throne.[1]

Years ago, the Fire Dragon was placed in the Fire Temple by Master Wu to guard the Sword of Fire.[2]

Lord Garmadon summoned the Fire Dragon when Kai and Master Wu attempted to escape from the Fire Temple with the Sword of Fire. Determined not to let them escape, the dragon blocked the exit and cornered them.

At some point, dragon pens were carved into the mountain underneath the Monastery of Spinjitzu and Flame began living there under the care of the ninja.

When the ninja learned that Lord Garmadon had apparently returned, Kai mounted Flame and flew it to Jamanakai Village, racing the other ninja along the way. After the threat had been discovered to be merely Lloyd Garmadon, Kai flew Flame back to the monastery. When the Hypnobrai attacked the village later in the day, Kai once again used Flame as transport there.

After the ninja had left to destroy Lloyd's treehouse fortress, Nya and Wu rode Flame to the scene where they rescued the ninja just before the fortress collapsed. Flame flew them back to the monastery, only to find it engulfed in flames.

After the ninja discovered the Destiny's Bounty in the Sea of Sand, Flame took up residence in some nearby ruins. However, Flame began to molt and left for the Spirit Coves where it merged with the other three Dragons to become the Ultra Dragon.

Flame is used to living in hot climates. He can swim in lava and travel into the Underworld. His skin is red and orange and may possibly be hot but cool enough to ride on. He also has yellow and gold accents on top of his red base color. He appears to have two large wings with deep red membranes, two legs, a slim neck and a big head with golden whiskers.

Fly into battle with the ninjas and their terrifying dragon to take on the evil Wyplash! Jump into the saddle and soar into the sky before swooping down with an attack on the creepy skeleton general. You must win the Sword of Fire and then display the limited-edition golden Nya Legacy minifigure to celebrate 10 years of LEGO® NINJAGO® sets.[3] 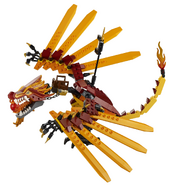