Flight of the Dragon Ninja

View source
watch 01:25
Jurassic World: Dominion Dominates Fandom Wikis - The Loop
Do you like this video?
Play Sound
“So we all agree, whoever wins this one will be the new Dragon Master for a month.”
— Cole

Flight of the Dragon Ninja

Flight of the Dragon Ninja is the second of six mini-movies, taking place directly after the pilot episodes of Ninjago: Masters of Spinjitzu. It aired on Cartoon Network in the Fall of 2011.

At the Monastery, Jay is trying to convince the ninja that he was the best out of them all after having won in a race with their dragons beforehand. They decide to hold another race, although Zane objects, claiming they should be training instead. Kai assures him that riding their dragons is a form of training.

They head out on their dragons, and Cole sets the terms of the race, telling them that whoever wins the race will be Dragon Master for a month. Kai and Zane get into a bit of a scuffle on their Dragons before Zane takes the lead. Cole and Jay speed through the Forest of Tranquility below, attempting to dodge the trees until the Earth Dragon smashes into one, snapping it in half and continuing on. The group approaches the "finish line" but Cole speeds across by dangling a roasted chicken on a rope in front of Rocky's nose. Cole lands first, but Kai tells him they'll beat him the next day. Cole protests that they agreed the winner would be Dragon Master for a month, but Zane claims not to recall ever agreeing to that. 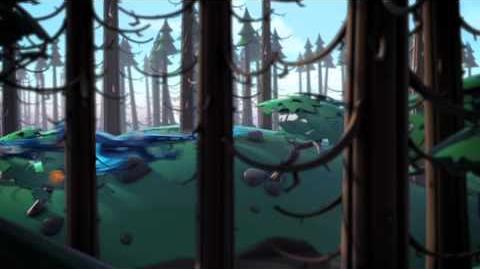