Operational
The Flying Jelly Subs were vehicles that were used by the Shark Army.

At an unknown point in time, Garmadon acquired his Shark Army and built his volcano along with the Flying Jelly Subs and other vehicles for the Shark Army. With this army and their vehicles Garmadon attacked Ninjago City almost daily, failing every day but the day after Lloyd’s birthday, he finally conquered Ninjago using the Ultimate Weapon. After Meowthra destroyed Ninjago City and therefore established Garmadon’s rule, The Flying a jelly sub along with other Shark Army Vehicles patrolled Ninjago in order to find the ninja. Following the Shark Army’s reform all of their vehicles were presumably destroyed or no longer in use.

The Flying Jelly Sub has several functions, the first being able to fly and hover, the second being able to use its tentacles as weapons, or for leverage as seen when the Shark Mech was hauled out of Ninjago City by a large squadron of Flying Jelly Subs. The 3rd function being able to lunch missiles from its sides, and the 4th being able to submerge underwater. All of these features are also seen in its set form. 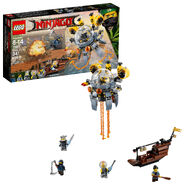 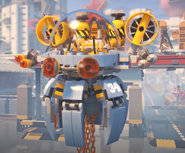 In the set's product animation