View source
watch 01:25
Jurassic World: Dominion Dominates Fandom Wikis - The Loop
Do you like this video?
Play Sound
“The scrolls gave us powers we have never felt before. It felt as if... we had reached our True Potential in an instant. It was a wonderful feeling. And a terrible one.”
— Master Wu, "Never Trust a Human"

Used
Forbidden Spinjitzu is a powerful dark counterpart of the martial art of Spinjitzu. A millennium ago, during the First Age, the First Spinjitzu Master created two scrolls containing the knowledge and power of the forbidden art. A young Wu and Garmadon took the scrolls against their father's wishes, using it to defeat the Serpentine sorceress, Aspheera.

By holding the scroll, the user is instantly granted incredible power, similar to when an Elemental Master accesses their True Potential. Consequently, it also twists the user's personality by making them aggressive, seemingly causing them to become addicted to it via prolonged usage until they become corrupted. It changes color when it corresponds with a different power. The Forbidden Spinjitzu is much stronger than regular Spinjitzu and can possibly banish or send someone or something to another realm, or even into another time.

60 years in the past, Zane uses Forbidden Spinjitzu to upgrade his powers after losing memories at the hands of Vex. He uses the ability to create soldiers, a dragon, and a harsher winter to rule over the Never-Realm.

Aspheera sets her sights on getting the power of Forbidden Spinjitzu. The Ninja find the scroll first and Lloyd grabs it, unlocking his Forbidden Spinjitzu form. Aspheera and the Ninja meet and a conflict ignites with Lloyd and Aspheera constantly losing and winning the scroll until Ashpeera grabs it for good and defeats the Ninja.

When Lloyd attacks Aspheera, she uses Forbidden Spinjitzu to knock him off the scroll.

Aspheera uses Forbidden Spinjitzu to get rid of the Ninja's defenses to get to Wu.

As Aspheera uses the power of the scroll to break down the gates, Lloyd holds the scroll and when Nya tells him to put it down for safety measures, he yells at her with a demonic tone but he snaps out of it and puts it down.

Later, Aspheera and the Ninja except for Kai and Nya use the scroll to fight against her with Zane ending the conflict, only for the Nindroid to get sent to the Never-Realm by the Serpentine witch using Forbidden Spinjitzu.

Wu later uses the art to try to stop the Ninja from going to the Never-Realm and P.I.X.A.L. to send the Ninja to the realm.

Returning from their recent battle, Grimfax tells the Ice Emperor of his victory only to be proven wrong by Vex. The Emperor then uses Forbidden Spinjitzu to punish Grimfax but decides to let him live under the condition that he atones for his mistakes.

Lloyd attempts to attack the Ice Emperor, who he found out to be Zane, and Zane uses Forbidden Spinjitzu to stop Lloyd from attacking him.

During the battle between Zane and Lloyd, Zane uses Forbidden Spinjitzu to fight against Lloyd and Akita by freezing them both but the two were freed when Zane regains his memory and destroys the second scroll of Forbidden Spinjitzu. 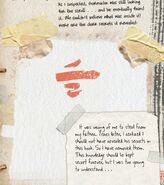 Forbidden Spinjitzu Kai, presumably due to an animation error