Not to be confused with the Glacier Barrens.

When they reach the Frozen Wasteland, Zane attempts to grab the Shurikens, freezing him in a block of ice in the process. The Guardian of the weapon, the Ice Dragon, is awakened, and the other three Ninja lift Zane up and ride atop him out of the Frozen Wastelands to the boat. They hit a pillar on the way out, breaking Zane out of the ice.

Seeking the Obsidian Sais, the Ninja traveled to the Ice Temple within the Frozen Wasteland to obtain them. Though they succeeded in finding the weapons, they fell under attack from an Ice Serpent but were able to defeat it.

Hiding place of one of the Four Golden Weapons of Spinjitzu, the Shurikens of Ice. Bordered by an icy sea, the Frozen Wasteland is an inhospitable place inhabited only by the hardiest of creatures. It is partially forested, but much of it is ice-covered mountains, treacherous cliffs, and dangerous crevasses. A fierce Ice Dragon guarded the shurikens within the Ice Temple. The ninja finally succeeded in retrieving the weapon and Zane tamed the Ice Dragon so that he could ride it.[3]

Inside the Ice Temple 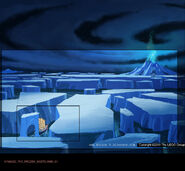