David Burrows
The Fuchsia Ninja is a Ninja who is the Elemental Master of Surprise.

Disappointed that his element is Green, Lloyd asked Wu if he can have the element of Surprise instead. The latter states it's already taken just before the Fuchsia Ninja surprises them.

He appears in the videogame as a playable character by leveling up your stud counter and getting the parts to make him. His weapon of choice is a Nin-Jô and can throw it or use it as a melee weapon. 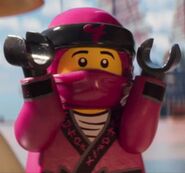 Retrieved from "https://ninjago.fandom.com/wiki/Fuchsia_Ninja?oldid=596413"
Community content is available under CC-BY-SA unless otherwise noted.