Jason Simpson
Fugi-Dove's brother is a criminal in Ninjago City.

Fugi-Dove's brother is drinking with friends at Laughy's when Zane and P.I.X.A.L. enter looking for clues to Milton Dyer's whereabouts. He recognizes the two as those responsible for locking Fugi-Dove in Kryptarium Prison, however, the two have no idea who he's talking about. Zane offends Fugi-Dove's brother in his "detective monologue" which starts a brawl in the bar. Zane struggles to land a hit on Fugi-Dove's brother, as he is narrating every move he is about to make. P.I.X.A.L. eventually steps in and takes him out. 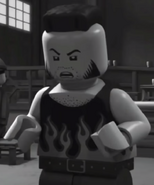 Add a photo to this gallery
Retrieved from "https://ninjago.fandom.com/wiki/Fugi-Dove%27s_brother?oldid=580804"
Community content is available under CC-BY-SA unless otherwise noted.