View source
watch 02:24
Wiki Targeted (Entertainment)
Do you like this video?
Play Sound
“
Silly mortal! That's not a stick! That's a stick!
— Gahrann to Master Wu
„

Unknown
Gahrann the Dreamer is the master of the Dream World and a former associate of Lord Garmadon.

Long ago, Master Wu had defeated Gahrann the Dreamer and imprisoned him in The Tower of Tears. However, Garmadon blew up the tower and told him to defeat Master Wu. After battling Cardinsto, Master Wu took a nap. Gahrann soon appeared in Wu's dream as Flame. Wu discovered his identity and challenged him to a battle. Gahrann summoned a giant mace and tried to destroy Wu. Master Wu dodged the attack but got stuck in a cloud. Right when Gahrann was about to take the final strike, Wu broke out. Wu then kicked him off the cloud, but he respawned to the top. While Gahrann was flying, Wu got on top of him and slammed him down. However, Gahrann turned big and tossed Wu to an another planet. There, he disguised himself as the kid Garmadon and pretended that he was never bitten by the Great Devourer. He then said the guards captured the Ninja. When Master Wu saw this, he realized Gahrann's plan and tripped him. Gahrann took off his disguise and told Master Wu to wake up. 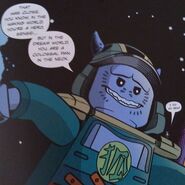 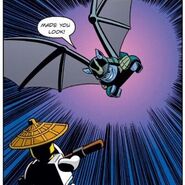