Ninjago Wiki
Register
Don't have an account?
Sign In
Advertisement
in: Ninjago, The LEGO Ninjago Movie, Vehicles,
and 5 more
English

View source
watch 03:36
Wiki Targeted (Entertainment)
Do you like this video?
Play Sound
“
Right now on that volcano, Garmadon is making something really big. He's building something huge, and surely... shark themed. And he's gonna come back sooner rather than later.
— Lloyd to Wu in The LEGO Ninjago Movie
„

Unknown
The Garma Mecha Man is a mech Garmadon used.

After failing numerous times on conquering the city, Garmadon wanted a new idea that would make him able to finally conquer Ninjago. After most of his Generals failed (and got fired out of the volcano), his IT team came up with a new idea. The next morning, Garmadon's soldiers had finished crafting his new vehicle, the Garma Mecha Man. Garmadon attacked the city but the Ninja came to save the day. Lloyd tried to take down his father himself, but his missiles were not strong enough for his new mech. He then tried to attack him but Garmadon choked his Mech Dragon and launched it back to the Ninjago Docks. With Lloyd out of the way, Garmadon was now unstoppable. He climbed up the Ninjago Tower and finally conquered Ninjago. Lloyd later went to the top of the tower and fired the Ultimate Weapon at the Mecha Man, only for it to awaken Meowthra. Garmadon then used the Garma Mecha Man to kick the Green Ninja Mech Dragon off the tower. It's unknown what happened to the Mech after this.

Much like Garmadon's Shark Mech, it has a shark-like appearance. Its left arm is a gun that shoots sharks. As seen in the movie, the mech itself is pretty massive and tough as Lloyd couldn't defeat it with his mech's missiles. 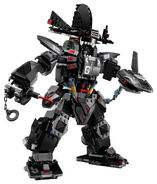 The design of the Garma Mecha Man.

The Garma Mecha Man approaching from the sea.