Ninjago Wiki
Register
Don't have an account?
Sign In
Advertisement
in: The LEGO Ninjago Movie, 2017, Buildings,
and 2 more
English

Garmadon's Volcano Lair is a volcano built atop a great ocean located off the coast of Ninjago City, it serves as a home for Garmadon, his Shark Army and GPL Tech, it also serves as Garmadon's base of operations and a garage to all of the Shark Army's vehicles. The Firing Room is located in the volcano and is where Garmadon fires any of his Generals who make him angry.

At an unknown point of time, Garmadon acquired his Shark Army and built his Volcanic Lair and started attacking Ninjago almost daily, but after being defeated by the Secret Ninja Force, he would retreat back to the volcano.

On Lloyd's 16th birthday, Garmadon attacks the city once again, only to be defeated. He escapes and throws many of his generals out the volcano for failing to help him. He then beings to form a big attack to conquer Ninjago, and decides to build a gigantic mech that is immune to weapons.

After the fall of Ninjago city, Garmadon uses a drone to track the Secret Ninja Force and Master Wu, he hears him talking about an Ultimate Ultimate Weapon, then leaves his Volcanic Lair and decides to go thwart their attempts to regain the city

Garmadon's Volcano Lair was built atop Ninjago’s ocean. The only way to gain access is by water or by air, which was soecifally designed for only the Shark Army to have access to it.

The hanger bay serves as a garage for all of the Shark Army’s vehicles: Manta Ray Bomber, Piranha Mech, etc.

The Firing room is the place where Garmadon fires all of his generals that make him angry.

Several watchtowers surround the volcano to serve as a first defense if the lair was attacked. 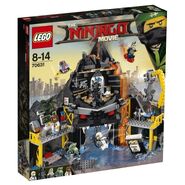 Set form on the set box. 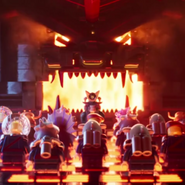 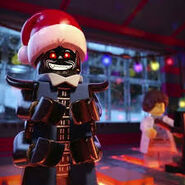