Garmadon Issue 1 is the first issue of the Garmadon limited series.

A walkthrough of Garmadon's history throughout Ninjago recounts his role in the events from the Pilot episodes to Season 10: March of the Oni.

Garmadon was sleeping when he heard someone call out to him. He demanded the taunting caller to show themselves and found himself face to face with... Garmadon. The two Garmadons battled each other, with the doppelgänger mocking him as a failure to every role he played. Garmadon retorted that he was a conqueror and delivered a final blow on him. The doppelgänger told him he lost and Garmadon smiled, questioning him if he did, but soon watched his own sword split apart in disbelief. When asked, the doppelgänger told him he was the one person who he could never defeat.

Garmadon screamed in fury and then woke up with a gasp. He recovered, reminding himself it was just a dream, and traveled throughout the rest of the day. At night, he found a lake and made camp, thinking about how the woods seemed to have eyes, when he heard a roar. A bear was attacking a girl and her mother. Garmadon leapt into battle from behind and tried to use his powers when the bear further angered him. They both watched as his powers made no more than a small spark and the bear slammed him into a tree. The girl and her mother threw acorns at the bear to distract it. Garmadon then cut down the tree and it fell on top of the bear. The bear ran away, yipping. The girl and mother thanked Garmadon for helping and convinced them to go back to town in exchange for a feast in his honor. A dark presence watched him as he carried the mother, who had hurt her leg.

Two men, Renzo and Kenzo, were squabbling over who's fault it was over the fate of the village for not having enough barrels of Two Moon Tea for the Red Crows when a villager announced that Min and Saeko had saved them. After a small discussion about their whereabouts, Garmadon watched in astonishment as Renzo handed Saeko a cup of tea and it healed her. Garmadon was given a cup himself and his powers came back, blasting one of the walls of the village. Kenzo, Renzo, Saeko, and Min then took Garmadon to where they produce their tea and told him about the powers of the tea and the problem of Kuma and the bears guarding the woods. In exchange for defeating Kuma, the brothers offered Garmadon their wagon full of tea. While Garmadon investigated the barrels of tea, the brothers whispered behind his back about what would happen with the Red Crows. Garmadon started laughing once the brothers thought the village would probably be okay and they all joined in with his laughter. But then, Garmadon drank a barrel of tea and claimed that Ninjago would at last be his.

Outside of the village, Ultra Violet saw Garmadon's destruction and rode off to a mysterious structure. There, she announced to Lord Mogra that Garmadon had returned. Lord Mogra then questioned Ultra Violet if that changed her loyalty, to which she replied without hesitation that it did not. This satisfied him and he proclaimed that while the Sons of Garmadon were gone, the Red Crows would fly forever.

Featured on the PREVIEWS Catalog February 2022 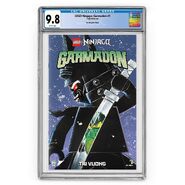 Promotional image of the 9.8 graded and slabbed Sao Menguito Cover