This article is about the vehicle in the series. For the LEGO playset, see 70504 Garmatron.

Destroyed
The Garmatron, also referred to as the superweapon or the ultimate weapon, was a massive tank with an oversized main cannon and Dark Matter ammunition, designed to upset the balance of light and darkness in the world.

During his battle with the First Spinjitzu Master, the Overlord created the Celestial Clock, with the intent that once it finished its countdown, it would activate, powering up the Garmatron. Before he could begin construction, however, the Overlord was defeated and the Stone Army was buried away, with the Island of Darkness and the Celestial Clock being sunk beneath the waves. Nevertheless, the Overlord, weakened, anticipated the day his champion, the prophesied Dark Lord, would arrive and construct the Garmatron.

After the fabled Dark Lord, Garmadon arrived on the shores of the Dark Island and brought it up from the waves, he set to work mining troves of Dark Matter upon the Overlord's advice. Upon Garmadon's questioning of its use, the Overlord revealed his plans to create a "superweapon" that would upset the balance between light and darkness, allowing Garmadon to remake Ninjago in his own image, impressing the Dark Lord enough to begin construction of the Garmatron.

While infiltrating Garmadon's camp to retrieve the Helmet of Shadows, the ninja stumbled across the Garmatron during its construction. Fazed by its colossal size, they agreed that they needed to stop the Celestial Clock, lest it is finished, and set loose upon Ninjago. Though they initially succeeded in stealing the Helmet, the Stone Army barely succeeded in stalling them long enough for the Celestial Clock to finish its countdown. Fully charge, the ancient device fired off a beam of energy that razed everything in its path, entering the Garmatron and fully powering the machine.

With the Garmatron fully operational, Garmadon set to work transporting the superweapon to the shores of the Island of Darkness, preparing to fire off blasts of pure Dark Matter and upset the balance. Upon being confronted by his family, Garmadon attempted to activate the Garmatron, only to discover to his rage that it had a countdown that the Overlord had neglected to mention. Even as the machine began to charge, Garmadon initially confronted Lloyd atop the Garmatron, only for Kozu to intervene, allowing him to drop them both out of a trapdoor and barely postpone their final battle. Even then, the Garmatron finished its warm-up, and ready to fire, blasted a missile of dark matter onto Ninjago, where it landed near Ignacia and corrupted all of its inhabitants. Triumphant, Garmadon fired another missile at Jamanakai Village, only for the Overlord to cackle maniacally. Angered, Garmadon reminded him that the Garmatron had been built for him, only for the Overlord to reveal that by upsetting the balance, he was now able to return to Ninjago. Even as the darkness created a portal above Garmadon, the Overlord possessed him and proceeded to clash with ninja, attempting to fire more missiles at the same time. However, he was sabotaged when Master Wu kicked Kozu into its loading bay, firing off his general instead, even as Kai began to commandeer one of the Garmatron's side turrets. Before he could keep the two from further sabotaging his attempts, the Overlord was confronted by Lloyd, clashing with him, though ultimately winning. Triumphant, he attempted to fire one of the Garmatron's dark matter missiles at him, only for Dr. Julien to block the shot using the Destiny's Bounty, destroying the ship in the process. The Overlord, frustrated, transported the Garmatron alongside the rest of his forces to Ninjago, making plans to finish their battle later.

Arriving at Ninjago City, the Overlord proceeded to corrupt its inhabitants using the power of the Garmatron. Having successfully taken over the city, the Overlord began the Garmatron's transformation into its second form; a massive tower rising above all other buildings, with its cannon becoming a smaller, more compact laser turret that could maneuver around the Garmatron more easily. Later, upon their arrival, the ninja noted in awe the Garmatron's final form, eventually regrouping and attacking the tower. Despite their efforts, however, the Garmatron's turret defeated both the Ultra Dragon and Golden Mech with a single shot each, piloted by a corrupted Nya. Traversing up the side of the superweapon, the ninja succeeded in allowing Lloyd to confront the Overlord at the very top, where the two battled, with Lloyd unlocking his True Potential and defeating the Overlord with the Golden Dragon. Following the destruction of the Overlord, the Garmatron was completely obliterated as a result, with little to no sign of its existence, save for the massive crater it had left behind.

The Garmatron is massive and powerful, able to crush or push aside anything in its path - despite this, it can also move fairly quickly for its size. Its armaments include movable spikes between its treads and cylindrical turrets on either side of its hull that can fire regular energy blasts or Dark Matter rounds. Its primary weapon is the massive cannon on its front, which can fire projectiles clear across the Endless Ocean. Its usual ammunition is a large missile with a Dark Matter warhead, allowing it to infect large portions of land with pure evil energy. The cockpit—located at the top of the machine—features a lever-activated trapdoor in the middle of the floor, allowing the pilot to drop enemies into a shaft which shoots them through a door, and out through the back of the Garmatron. Likewise, the back of the machine displays two crossbows that act as a lesser means of attack.

Although the Garmatron has not displayed any structural weaknesses, its weaponry has a few exploitable flaws. Its side turrets can be commandeered by enemies (as Kai did) and turned against the Overlord's own forces. Additionally, its main cannon has a twenty-second warmup period before it can fire its first shot, and its Dark Matter ammunition must be loaded manually into a port on its side.

Following its transformation, the Garmatron was converted into a massive tower that easily dwarfed all of the other buildings in Ninjago. In this form, though immobile, the Garmatron retained its powerful armor, with its cannon being converted into a more compact turret that could quickly maneuver around its side, needing a rider to operate it. Though no longer firing Dark Matter, the turret was extremely powerful, with both the Ultra Dragon and Golden Mech failing to withstand even a single shot. Additionally, its shots were much more rapid in succession and didn't need to be manually loaded, making the machine's attacks far more difficult to evade. However, despite this, the turret became noticeably less armored, as an attack from Kai was eventually able to disable it.

Concept art of the Garmatron 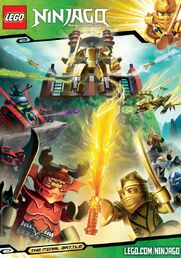 Concept art of the Garmatron tower in Ninjago City

The Garmatron's firing display, including the warmup gauge for its main cannon

In Ouroboros in The Final Battle
Add a photo to this gallery
Retrieved from "https://ninjago.fandom.com/wiki/Garmatron?oldid=572499"
Community content is available under CC-BY-SA unless otherwise noted.