Stiix and Stones
70731 Jay Walker One

Deceased
Ghost Warrior Ghurka was a former prisoner of the Cursed Realm.

Note: Due to all ghost warriors being identical in appearance, it is impossible to determine who is who in the television series. As such, any appearances of a ghost warrior will be cataloged here, regardless if they are in fact Ghurka.

At an unknown point in time, Ghurka died and was sent to the Cursed Realm, either as a result of his crimes in life or due to being banished by another. To his horror, he became a Ghost Warrior, likewise discovering the Cursed Realm to be filled with ghosts, and falling under the command of the Preeminent, the sentient consciousness of his new home.

During Morro's confrontation with the ninja, he used the Allied Armor of Azure to summon Ghurka and several other Ghost Warriors to aid him. Due to their intangible status, Ghurka and the others quickly overwhelmed the ninja, only for Ronin to give them access to the Aeroblades. Due to being made of Deepstone, the Aeroblades were able to touch the Ghosts, leaving Ghurka helpless as his body was destroyed by Kai, his soul being dragged back into the Cursed Realm as a result.

After gaining the Realm Crystal, Morro summoned Ghurka and several other Ghost Warriors to Stiix, tasking them with guarding the city in preparation for the ninja. Making short work of the citizens by imprisoning them, Ghurka began to lounge around, enjoying the luxuries of life he had missed out on, such as food and dance. However, when the ninja arrived, he confronted them, only to be destroyed. However, to his ecstasy, he was able to be revived infinitely by the power of the Realm Crystal, allowing him to continuously fight his opponents with little fear of death. Later, he welcomed the Preeminent's arrival into Ninjago.

As the Preeminent began devouring souls in order to gain strength, Ghurka assisted his master, protecting her from the ninja. Later, when the ninja attempted to drop the Preeminent into the Endless Sea, Ghurka and his fellow Ghosts set to work on helping their master possess the entire city of Stiix, granting her greater strength, and far greater tolerance to water, allowing her to pursue the fleeing citizens. Protecting his master, Ghurka was eventually killed when Nya unlocked her True Potential and summoned a tidal wave, destroying his master, allies, and himself, with the fate of Ghurka's soul left ambiguous with the destruction of the Cursed Realm.

Ghurka is a pretty powerful ghost, with only one big weakness: he's scared of ghosts. He often goes into battle with his eyes closed, yet remarkably rarely misses a shot with his crossbow. His distaste for seeing other ghosts means Ghurka is often sent out as a one-spirit battle squad, striking fast and then disappearing.[link unavailable] 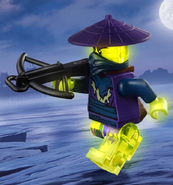