View source
watch 01:25
Jurassic World: Dominion Dominates Fandom Wikis - The Loop
Do you like this video?
Play Sound
“And now, ladies and gentlemen, I present to you this museum's greatest find. It outdates every other piece we have here, found right underneath this very building. I give you, an ancient Stone Samurai Warrior!”
— The Museum Curator to the Ninjago City tourists, "The Stone Army"

Scott McNeil
The Giant Stone Warrior is part of the Overlord's Stone Army. Sporting four arms and having a far greater size than any other Stone Warrior, it is one of the strongest soldiers of the Island of Darkness. Buried when the First Spinjitzu Master split Ninjago in two, one Giant Stone Warrior was unearthed thousands of years later and put on display in the Ninjago Museum of History. There, it was brought to life by the Great Devourer's venom and went on a rampage in the museum, before being defeated by Lloyd, who led it to fall into a massive sinkhole.

After the Overlord was defeated, most of the Stone Army was decimated, with at least one Giant Stone Warrior being captured and locked away in Kryptarium Prison. The Stone Warrior would battle the ninja during their ordeal with the Anacondrai Cultists, whose actions had led them to the prison, although it was unable to defeat them.

Massive titans of their brethren created to combat the First Spinjitzu Master, the Overlord led them in a battle against his enemy. Eventually circling the First Spinitzu Master, the Giant Stone Warriors were defeated when he split Ninjago into two continents and proceeded to bury them in locations outside of the tomb of the Stone Army.

Misako found a Giant Stone Warrior buried underneath the Ninjago Museum of History, and put it on display. An amount of the Great Devourer's venom leaked onto it, causing it to be reawakened. It proceeded to rampage through the museum, and the ninja were unable to stop it due to the invincible material that made up its body. Eventually, Lloyd tricked the warrior into falling back into the sinkhole where Misako had uncovered it.

Eventually, the Great Devourer's venom would awaken at least one more Giant Stone Warrior, which due to the havoc it caused was eventually imprisoned in Kryptarium Prison.

While observing the fight between the ninja and the transformed Anacondrai Cultists, the Giant Stone Warrior was released from captivity after No-Eyed Pete used a discarded Anacondrai spear to press a button that opened the cell doors. Vengeful over the defeat of the Overlord, the Giant Stone Warrior attacked the ninja, before participating in an attempted escape from Kryptarium. However, its escape would be foiled when Zane shattered the ice slide it was attempting to climb, throwing it back into the courtyard where it was cornered by the guards and re-imprisoned.

The Giant Stone Warrior, attempting to eat the lunch it was served to no avail, would be roused by the fight between the ninja and the Mechanic. Participating in the ensuing prison brawl, it'd eventually be stopped in its antics after being herded back to its cell by the guards, attempting to shrug them aside but eventually being escorted once again.

Pictured in the Ninjago history mural 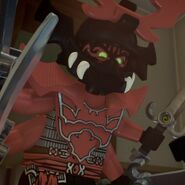 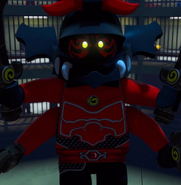 In the Season 10 opening