Ninjago Wiki
Register
Don't have an account?
Sign In
Advertisement
in: 2012, 2011, Ninjago: Masters of Spinjitzu,
and 14 more
English

Not be confused with another gliders.

“I once built these wings from scrap metal and other—”
— Jay to Nya, Once Bitten, Twice Shy"

Ninja (except Lloyd and Nya)

Intact
Gliders are one of Jay's inventions used for gliding long distances without touching the ground, appearing as a set of sail-like wings made of sturdy cloth stretched between several wooden poles and mounted on a person's back. A set of cords on the supporting poles connect to small wooden handles in the user's hands, allowing them to move the wings in flight.

The Golden Weapon/How to Build a Dragon (flashback)

When Master Wu met Jay, the latter was testing a set of gliders by gliding off of a building. Unfortunately, Jay ended up crashing into a billboard. After crashing into the billboard, Wu told him to "build the impossible.

Jay brought some gliders with him after he moved to the Monastery of Spinjitzu. The ninja used them to escape the Skulkin attack at the Floating Ruins, after obtaining the Nunchucks of Lightning. The wings allowed them to glide to the Forest of Tranquility, where they set up camp for the night.

When Jay tries to show off himself to Nya in the Mega Monster Amusement Park, he tells her that he once built wings from scrap metal and other.

When Lord Garmadon was preparing to leave the Destiny's Bounty, he had a final talk with his son, Lloyd. After failing to convince his father to stay with his friends, Lloyd went to a nearby closet to grab a pair of gliders, saying that Lord Garmadon might need them to get off of the flying ship. However, Lord Garmadon had already left before the Green Ninja could get an answer. 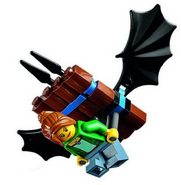 The broken glider on Jay's side