Ninjago Wiki
Register
Don't have an account?
Sign In
Advertisement
in: Prime Empire, 2020, Ninjago: Masters of Spinjitzu,
and 3 more

“A glitch! A glitch in the game! A shortcut to get past the forest.”
— Ritchie in "The Glitch"

The Glitch
In Prime Empire, a glitch is active inside a rock in the Forest of Discontent that would allow players to bypass the forest. It was used by Ritchie to lead the ninja into a trap for the Red Visors.

After being captured by the ninja, Ritchie claimed there was a glitch in the game that would allow the ninja to bypass the Forest of Discontent.

Ritchie showed the ninja the glitch which teleports the ninja to an unknown cubed room. Suddenly, the Red Visors showed up and began shooting at the ninja. Ritchie laughed as the ninja fell for the trap and exited the room.

The ninja were losing their lives, but Okino rescued everyone and they safely made it out of the Glitch. 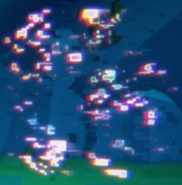