View source
watch 01:25
Jurassic World: Dominion Dominates Fandom Wikis - The Loop
Do you like this video?
Play Sound
“When you get it, place the idol on the beacon. Its power should destroy the Shadow Banshees!”
— Cyrus Borg to Kai and Nya

Gold Rush is the second Ninjago: Reimagined short, released on April 30, 2021. It was animated by Taiko Studios.[1]

This short film follows Nya and Kai as they race through the futuristic streets of NINJAGO City! Chased by a group of mysterious mechanical enemy, the brother-sister ninja team are trying to reach Borg Tower before the city is succumbed to darkness. With them, a powerful token. Will they make it in time? What is this special token? What do Nya and Kai need to do? So many questions - all of them answered in this NINJAGO LEGACY short.[2]

Kai and Nya drive throughout Ninjago City in the Prototype X-1 to get to Borg Tower whilst escaping the shadow banshees. While they argue about who broke the Idol of Unity, Cyrus Borg calls and interrupts them, and tells them to place the Idol on a pedestal at the top of the tower, so it can stop the banshees. The two then continue to race toward the tower, defending themselves from the shadow banshees at the same time. The two split up (with Kai in the actual car and Nya in the bike part of it) after more arguing, and decide to race each other to their destination. They manage to make it there, only for the shadow banshees to block their path to the top, causing them to crash. Shadows then engulf the two, and they try to find each other, both with a piece of the idol in their hands. They find each other, and they hug, thinking that all hope is lost. Both parts of the Idol then start to glow, and they realize what still could be done. The Idol is then connected, empowering Kai and Nya, who then proceed to get the Idol to the top of the tower. They succeed, destroying all of the shadow banshees in a burst of light. The siblings then proceed to drive off, starting another argument. 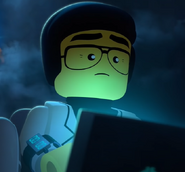