Intact
The Golden Hatchet Twins areweapon mainly wielded by Kruncha. They appear as a golden staff with a golden ax head on either end, with the blades facing in opposite directions from each other. It appears to resemble a golden pole with two ax blades attached on either end of it.

The Golden Hatchet Twins are described as being incredibly dangerous, due to their unnatural power and the difficulty of controlling them in battle. It is implied that they may actually have a will of their own, but nothing has been confirmed.

A true cut above the rest, the whirling blades of the Golden Hatchet Twins are extremely dangerous, incredibly hard to control, and way too powerful. Sometimes it feels like they're alive, but that's impossible, right?[link unavailable] 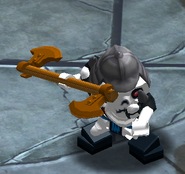 In Tournament
Add a photo to this gallery
Retrieved from "https://ninjago.fandom.com/wiki/Golden_Hatchet_Twins?oldid=658146"
Community content is available under CC-BY-SA unless otherwise noted.