Rise of the Spinjitzu Master
70505 Temple of Light

Operational
The Golden Mech is an ancient fighting vehicle, originally belonging to the First Spinjitzu Master.

Long ago, the Golden Mech was built by the First Spinjitzu Master to combat the threat of the Overlord. Worn by him as battle armor, the machine was fueled by Golden Power and suffered many battles against the darkness and keeping the Stone Wars at a standstill.

However, the Overlord proceeded to create the Stone Army to help battle the First Spinjitzu Master. Unable to combat the indestructible beings, the First Spinjitzu Master summoned the power of the Golden Mech's blade, cleaving it into the ground and splitting Ninjago in two. With the Golden Mech warding darkness off to the western half, it was eventually retired and stored in the Temple of Light.

Many years later, when the Overlord had trapped the ninja on the Island of Darkness, the ninja followed the Falcon back to the Temple of Light, where they discovered the Golden Mech after inserting the Elemental Blades into slots in the walls. After Sensei Wu and Misako identified it, Cole hopped into the cockpit, only for Dr. Julien to point out that the eons of disuse had rendered the mech non-functional. Sensei Wu theorized that the mech would respond to Lloyd, and the Green Ninja's presence in the cockpit was enough to restore the machine to its original state.

At some point after the final battle, Wu collected the remains of the mech and brought them to Cyrus Borg, who repaired it. Hiding the Golden Mech in case the balance between Light and Darkness was made unstable once more, Wu kept its resurrection a secret.

Realizing great darkness awaited them at the Island of Darkness, Master Wu secretly smuggled the Golden Mech within a crate, claiming it to be tea, onto the Destiny's Bounty. When Misako asked what it was, Wu simply said "tea." Disguising its true nature from his pupils, fearing they would grow arrogant and cocky with the knowledge of such power behind them, Wu kept its nature hidden. Later, after the Destiny's Bounty crashed, Wu ensured the Golden Mech was unscathed before sailing with it in tow along the River of Darkness.

With Clouse corrupting the Temple of Light and both halves of Ninjago coming together to form a dark whole, Sensei Wu, deciding now was the time, unveiled the Golden Mech. Piloting it, he used its immense powers to shatter Clouse's dark barrier. After Clouse converged his shadows to form a doppelganger mech, the Golden Mech quickly shattered and dispatched its opponent, and summoning the power of its mystical blade once more, separated Ninjago's halves yet again and dispersed the darkness from the Temple of Light.

The Golden Mech had impressive physical abilities, being able to smash through the wall of the Overlord's fortress and knock around Stone Warriors with little trouble. It wielded a large golden sword in a battle that could engulf itself in flames for added strength, and during its peak power under the First Spinjitzu Master's control was able to split Ninjago in half. It likewise possessed the ability to fly via rocket boosters in its feet.

The Golden Mech's main strength, however, was the inherent light it harbored, capable of keeping back the Overlord and likewise strong enough to completely disperse any and all lesser manifestations of darkness. However, its power would be proportional to that of its user, and the weaker and more injured its pilot, the less powerful the Golden Mech would become.

Following countless years of battle against the Overlord, Stone Warriors, age, the First Spinjitzu Master's absence, and being untended to for countless years, the Golden Mech became far weaker, mostly a shadow of itself although still formidable in general. Due to the toll of time, battle, neglect, and the control of an already-crippled Lloyd, the Golden Mech became more vulnerable and was thus able to be downed by a single shot from a Dark Matter turret.

Despite this, the Golden Mech retained enough durability to be left in a salvageable and was thus repaired by Cyrus Borg, he restored the machine back to its former glory. Under the control of Sensei Wu, the Golden Mech was put closer to its original peak, being able to smash through Clouse's dark barrier with ease and easily destroy his Shadow Mech. Likewise, it retained the ability to disperse darkness, cleansing the Temple of Light, and was capable of keeping the Ninjago halves from reuniting. 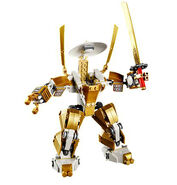 Concept art of the Golden Mech.

The Golden Mech in the background of a promotional poster for Legacy of the Green Ninja.

Wu in the Golden Mech in the Dark Island Trilogy mural.

The Golden Mech is revealed in the Temple of Light.

The Golden Mech and the Ultra Dragon

Retrieved from "https://ninjago.fandom.com/wiki/Golden_Mech?oldid=655153"
Community content is available under CC-BY-SA unless otherwise noted.