This article is about the legendary ninja and its associated lore. For the person who became the Golden Ninja, see here. For the Reimagined character, see here.

“
For once the Green Ninja finds the instrument of peace, he will strike it and know the power of the Ultimate Spinjitzu Master.
— Misako reading the scroll in "Island of Darkness"
„

Rise of the Spinjitzu Master
70505 Temple of Light

Alive (as the Green Ninja once more)

Jillian Michaels (seasons 1-7)
Sam Vincent (Season 8-present)
The Golden Ninja, also known as the Ultimate Spinjitzu Master, is a legendary hero stated to be the most powerful ninja and destined to defeat the Overlord, the source of Ninjago's evil.

Formerly known as the Green Ninja, Lloyd became the Golden Ninja during the Final Battle between good and evil.

Lloyd becomes the Golden Ninja, and fights the Overlord, in a battle that almost destroys Ninjago City. Using the power of the Golden Dragon, Lloyd summons the power necessary to defeat the dark lord, freeing Ninjago from his control and curing Garmadon of his evil.

Lloyd powered up into his golden gi while stopping the Venomari from burning down a village.[1]

Before the ninja got cornered and beaten by the Security Mechs, Lloyd (still in his golden form) powers down the mechs. The Digital Overlord then comes in and confronts Lloyd saying he doesn't want to fight but wants his power. 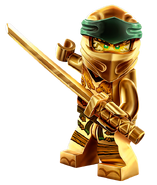 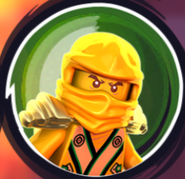