Not to be confused with Energy, another power with similar properties also used by Lloyd, or Light, another element used by Mr. Pale that is referred to in a similar way.

“The Golden Power needs to be protected, honored. Evil forces will seek it, try to take it for their own.”
— Master Garmadon to Lloyd, "The Curse of the Golden Master"

Existent; no longer used
Golden Power (sometimes referred to as Light[1]) is an elemental essence in Ninjago.[2] It is the most powerful combination of the four main elements (Fire, Earth, Lightning, and Ice) and is closely tied to Energy and Creation. It is also one of the two strongest powers in Ninjago, and is generally associated with the color gold. In "The Green Ninja," the potential to wield Golden Power was revealed to reside in Lloyd by the Golden Weapons, marking him as the one to ascend as the Green Ninja.

Lloyd eventually unlocked the full potential of the Golden Power during his first battle with the Overlord, using it to defeat the dark villain and destroy his Dark Matter, with his suit turning gold. Following his recovery during the Nindroid crisis, the Overlord began planning to steal Lloyd's Golden Power for himself, in order to restore his physical body and become the Golden Master in order to destroy Ninjago. Lloyd then decides to divide the Golden Power with his fellow ninja, returning to them their respective Elemental Powers.

With the Golden Master defeated at this time, no living being wields the Golden Power in its strongest form anymore. The only currently known existence of Golden Power is in the Golden Armor, which was hidden by Cyrus Borg until it was melted down and turned back into the Golden Weapons. Following the battle with the Oni, the weapons lose their power, presumably meaning Golden Power no longer exists in Ninjago.

Briefly in the Digiverse

Lloyd using his Golden Power to summon the Golden Dragon. 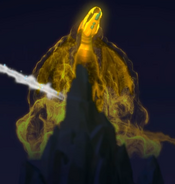 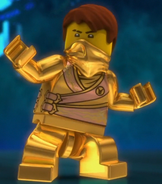 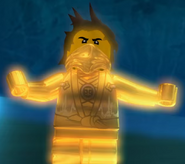