Vermillion (children)
The Great Devourer was a monstrous snake worshipped by the Serpentine as a god, believed to consume all of creation if left unchecked. According to legend, it could only be unleashed if the Serpentine tribes united and found the four silver Fangblades. It was responsible for Lord Garmadon's transformation to evil, as it bit him as a child and corrupted him with its venom. The Serpentine then tried using the Devourer to scare the people of Ninjago underground to protect them from the Golden Master. However, this only fueled the people's disgust for the Serpentine. Around this point, the Devourer was sealed underground.

When Lloyd freed Pythor, he schemed to awaken the Devourer by uniting the Serpentine and finding the Fangblades. Pythor successfully did so at the Lost City of Ouroboros, where the Devourer consumed him and Wu before heading to wreak havoc in Ninjago City. The ninja battled the Devourer until Garmadon seized the Golden Weapons and vaporized the beast.

Despite all, the Devourer's demise would only create further conflicts. Its venom revived the Stone Army, its eggs were used by Krux to breed an army of Vermillion, and the destruction it caused during its rampage through Ninjago City would ultimately motivate Harumi to become the Quiet One after the beast was responsible for both of her parents' deaths. Needless to say, the massive serpent had a tremendous influence on the future of Ninjago and would be responsible for many of the future enemies faced by the ninja.

In its early days, the Devourer was just a small green viper with an ominous poison that could turn the purest of hearts evil. It bit a young Garmadon, infecting him with darkness.[1] Over the years it grew into a titanic monstrosity.

The ancient Serpentine somehow took control of the Devourer and used it in their initial invasion of Ninjago.[citation needed] Following the Serpentine's defeat, the beast was sealed under the Lost City of Ouroboros.[2] It also laid the Vermillion eggs, creating the Vermillion.[3]

The Great Devourer's existence was revealed when Cole and Zane entered the Constrictai Tomb. While searching for the inhabitants, the two ninja discovered a crude mural on the wall depicting the Serpentine gathering before an especially massive snake. Zane translated the drawings as a prophecy: when the Serpentine united as one, they could find the Four Silver Fangblades and unleash the Great Devourer, who would consume all of Ninjago and turn day into night.

A statue of the Great Devourer was present at one end of the Slither Pit arena in the Lost City of Ouroboros.

The Great Devourer made its first true appearance in a flashback Master Wu had before he set out to find Lord Garmadon's Dimension when the old man told his students how Lord Garmadon's descent into evil began when he was bitten by a strange green snake in the bushes. Wu explained that the snake—the young Great Devourer—was a legendary beast that would consume all in its path, and its venom could turn even the noblest soul into a being of pure evil. He charged the ninja with finding the four Fangblades before the Serpentine could, as the Fangblades were the keys to the Devourer's revival.

Despite the ninja's best efforts, Pythor managed to collect all of the Fangblades and retreat to Ouroboros, where the Devourer was thought to have been imprisoned. Placing the Fangblades in the teeth of the statue overlooking the Slither Pit arena, Pythor commanded the Devourer to awaken, expecting it to emerge from the statue. To his surprise, the beast was not within the statue, but beneath the arena itself, and it was far larger than Pythor had expected.

More frightening still for the Anacondrai General, Master Wu revealed that the Great Devourer was not bound to obey the one who awakened it and had no qualms about eating the Serpentine along with the rest of the world. As Master Wu prevented Pythor from fleeing, the Great Devourer burst free of its stone prison, immediately swallowing Pythor and Master Wu whole.

The ninja attempted to escape the Devourer in the Destiny's Bounty, but they only succeeded in making the beast even bigger when it ate their jettisoned ballast and the ship itself. However, the escape gave them time to reach Ed & Edna's Scrap N Junk, where they used a Tornado of Creation to build the Ultra Sonic Raider. Equipping their new vehicle with Zane's recording of the Sacred Flute, they managed to deal some damage to the Devourer, also discovering a small weak spot on the top of its head. However, the Great Devourer destroyed the Ultra Sonic Raider's sonic cannons and withdrew to attack Ninjago City.

The ninja followed the Great Devourer and managed to prevent it from consuming any innocent civilians, but the monstrous snake proved too powerful for them to defeat. Even the arrival of Nya's Samurai Mech and the Ultra Dragon did little against the Devourer. Eventually, Lord Garmadon arrived and revealed that the only way to slay the Devourer was to use the power of all four Golden Weapons, which only he could do. Despite their misgivings, the ninja agreed, with Kai also telling Lord Garmadon about the Devourer's weak spot.

While Lord Garmadon left to prepare his attack, the ninja distracted the Great Devourer, leading it on a mad chase around the city. Eventually, they were able to immobilize the beast by tangling its body in buildings and tricking her into biting her tail, leaving her weak spot wide open as Lord Garmadon combined the energies of the Golden Weapons with his dark powers. Declaring his actions as vengeance against the Great Devourer for dragging him down the path of evil, Lord Garmadon leaped from a skyscraper and plunged through the creature's weak spot with the Golden Weapons, causing the Great Devourer to explode spectacularly, releasing large amounts of venom onto the city.

During the Great Devourer's rampage, Harumi's parents were killed after the massive serpent destroyed their apartment building in Ninjago City.

Despite its destruction, the Great Devourer's evil influence continued to plague Ninjago—literally—as its defeat flooded the city with venom. The ninja spent a large amount of time helping the city's cleanup efforts. When Skales was attempting to assert his leadership over the Serpentine, Skalidor suggested unleashing the Great Devourer again, only for Skales to strike the Constrictai General for suggesting a bad idea.[4]

Lord Garmadon called his Serpentine forces together on the Black Bounty for a brainstorming session on how to defeat the ninja with his new Mega Weapon. Upon hearing that the weapon could only create, not destroy, Lasha suggested recreating the Great Devourer. Lord Garmadon was not amused by the idea and had the Venomari Scout thrown overboard as a sign of his displeasure.[5]

More of the Devourer's venom seeped deep underground, activating an entire army of Stone Warriors, which were suddenly awoken, sealed in a hidden tomb unearthed by the Serpentine, which ended with the Serpentine themselves being sealed away once again.[7]

During Cole's time apart from the team after Zane's apparent death, Cole imagined Kai would react to his cooking by saying, "Even the Great Devourer wouldn't eat this junk!"[9]

Kai said that Clouse's pet was the second biggest snake he had ever seen, alluding to the colossal Great Devourer as the biggest.[10]

Master Chen kept a scale of the Great Devourer in his Hall of Fame. Garmadon brought up the Devourer when he and Nya were about to be fed to Clouse's pet, he stated that he destroyed the largest snake so karma has ensured the second biggest snake would come after him.[11]

While hiding from Nadakhan and the Sky Pirates, Nya suggested that Jay could wish for the Great Devourer to be brought back while thinking of what Jay can use his last wish on.[12]

At one point, Lloyd discovered that Pythor and Fangtom intended to use Dark Matter to transform into the Great Devourer.[ Clarify ][13]

Krux used eggs from the Great Devourer to breed an army of Vermillion—once again providing the ninja with a new army of adversaries.[14]

After hearing Lord Garmadon was the one that defeated the Devourer, Harumi set out to resurrect Garmadon to exact vengeance on the ninja for their poor efforts to stop the Devourer.[15] Ultimately, Harumi allowed Lord Garmadon to create the Colossus, which wreaked havoc on Ninjago City in a similar fashion to what the Devourer did (even down to both of them destroying a version of the Destiny's Bounty).[16]

The Great Devourer had an insatiable appetite and the ability to consume anything that it came across. Whenever it consumed something, it grew larger and more powerful—the ninja noticed that it would have been truly unstoppable if allowed to consume the bustling metropolis of Ninjago City.

In combat, the Great Devourer normally used its tremendous size and nigh-invulnerability to her advantage, attempting to swallow anything in its path and smashing opponents with her spiked tail. Its venom was capable of bringing inanimate objects to life and could corrupt even the purest individuals into wrathful megalomaniacs against their will, such as the case of Garmadon.

Additionally, it seemed to display a sense of tactical thought, tricking both the ninja and the Ultra Dragon into thinking they had either defeated or escaped it, only to suddenly ambush them when their guard was lowered. Despite its massive size, it was also incredibly fast and had the ability to burrow through the ground with ease.

The Great Devourer only displayed two real weaknesses throughout the show. Like the Serpentine, it appears to be intolerant of the Sacred Flute's music, to the point of physical pain. It also had a small weak spot on top of her head. If it took a particularly powerful blow to this point, it would result in its death, as evidenced when Garmadon used the Golden Weapons to finally destroy it once and for all. 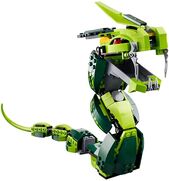 The Great Devourer in a 2012 LEGO commercial

A version of the Great Devourer on a poster for Season 1: Rise of the Snakes

Ninjago: The Ride at LEGOLAND

The Great Devourer in the Rise of the Snakes mural.
Add a photo to this gallery

The people celebrate its initial defeat.

The face of the Great Devourer in Ninjago's past

The statue honoring the Devourer in Ouroboros

The Serpentine gathering before the Great Devourer in a drawing on the wall of the Constrictai Tomb.

The Great Devourer rises from the Lost City of Ouroboros

The Great Devourer rising from Ouroboros

The Great Devourer stares down at the ninja

A shot of The Great Devourer's upper body

The Great Devourer roars at the ninja

The Great Devourer on a hologram.

The Great Devourer arrives at Ed and Edna's junkyard

The Devourer in a subway tunnel

The Devourer prepares to attack Ed and Edna's jalopy.

The Great Devourer confronts the Ultra Dragon from atop a skyscraper.

The Devourer lunges at Zane and Jay.

An immobilized Great Devourer biting her own tail as Lord Garmadon prepares the final blow.

The Great Devourer in the March of the Oni opening.
Add a photo to this gallery

In concept art for The LEGO Ninjago Movie

Set concept
Add a photo to this gallery

Retrieved from "https://ninjago.fandom.com/wiki/Great_Devourer?oldid=624643"
Community content is available under CC-BY-SA unless otherwise noted.