View source
watch 03:36
Wiki Targeted (Entertainment)
Do you like this video?
Play Sound
“
So we just think about fighting other things and use that to fight this thing? Awesome!
— Jay
„

Greatest Battles is the tenth and final part of the ten-part mini-series of Ninjago: Decoded.

Solving the puzzles releases a new peril for the Ninja to face. Will memories of their greatest victories be enough to defeat it?

The "Ninjigma" stored the memory of Zane battling Overlord and dying in the process. Nya reveals that the Overlord present in the virus is not actually the Overlord, but a fragment of his code and a virus at that. The ninja battle the virus by thinking about all the other enemies they’ve defeated and weapons they’ve used.

However, this strategy fails to do anything as the virus seems to have the upper hand. The team then realizes that it's not their weapons that made them strong, but rather their friendship. With this, the ninja are able to purge the virus out of Zane. 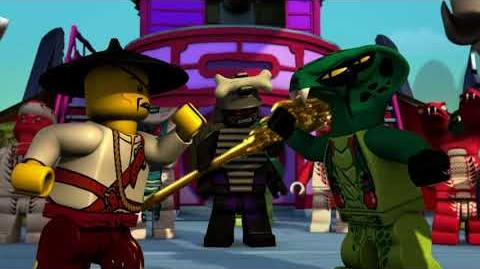