View source
watch 02:23
Who is Green Ninja?
Do you like this video?
Play Sound

This article is about the legendary ninja and its associated lore. For the person who became the Green Ninja, see here. For the episode, see here.

Rise of the Snakes (pictured)
The Green Ninja (also known as the Chosen One) is a legendary figure said to be the strongest of all ninja, destined to defeat evil in a final climactic battle for the fate of Ninjago.

The legend of the Green Ninja plays a major role during the return of the Serpentine, as the heroes search for his identity and eventually begin training him to fulfill his role as the Chosen One.

After their first meeting with Lloyd Garmadon in Jamanakai Village, the ninja realized that they had accidentally brought Master Wu's satchel with them in their haste to stop "Lord Garmadon". Within the satchel was a scroll detailing the prophecy of the Green Ninja, said to be a ninja who would rise above all others and become the savior of Ninjago. Upon reading the scroll, the Ninja believed that the Green Ninja was meant to be one of them, with each Ninja believing that he was the destined one.

When they returned home, the Ninja immediately set up a fighting tournament to see which of them was the strongest—and thus, which of them was the most likely to be the Green Ninja. It eventually boiled down to a battle between Kai and Cole, but the fight went out of control when the former lost control of the Sword of Fire. Master Wu managed to extinguish the resulting blaze using the Shurikens of Ice, admonishing his students for thinking that any of them had what it took to be the Green Ninja; however, the Ninja interpreted this as a suggestion to train harder, in order to reach their full potential and become the prophesied hero of legend.

After leading the ninja to the Destiny's Bounty, Zane asked Master Wu if he was going to be the Green Ninja. Wu then explained that it is too early to tell, but if it is in his path, Zane would know.

One night, Zane had a strange dream that culminated in Lord Garmadon attacking him aboard the Destiny's Bounty. He was saved from the villain by the Green Ninja, who demonstrated several incredible abilities while defeating Lord Garmadon. The dream caused Zane to oversleep, and he told his friends about the dream when they questioned his uncharacteristic tardiness. Unfortunately, their excitement over the dream caused them to neglect their daily training, forcing Master Wu to punish them with endless training until they could answer a riddle: "What is the best way to defeat an enemy?"

After Samurai X beat them to a Serpentine attack at Mega Monster Amusement Park, the Ninja were feeling upstaged and angry at the mysterious warrior. Master Wu suggested that they take it as motivation to become stronger, but the Ninja interpreted it as a hint that whoever discovered the identity of the Samurai would be the one destined to become the Green Ninja. As such, they began competing with each other to find and capture the Samurai, only to be outmaneuvered at every turn by their rival.

After the other ninja discovered Nya is Samurai X, Kai revealed that he found out first and reminded them of their bet that whoever learns the identity of the Samurai would be the Green Ninja. However, the others denied ever making such a bet.

As the hunt for the Fangblades took priority, the Ninja largely put the matter of the Green Ninja aside—all except Kai, who grew increasingly convinced that he was the legendary hero. He took to wearing the Green Ninja's gi and training alone at night, only to be highly embarrassed when the others caught him in the act. Kai's obsession with becoming the Green Ninja made him more high-strung than normal, which proved problematic when Lord Garmadon took up residence on the Destiny's Bounty (in order to help the Ninja save his son, Lloyd).

When the Ninja battled the Serpentine in the volcano behind the Fire Temple, Kai brazenly attacked Pythor in order to "prove" he was the Green Ninja. He successfully knocked the Fangpyre Fangblade from the Anacondrai's hand, only for a dilemma to present itself when Lloyd became trapped on a rock in a sea of lava. With the volcano growing increasingly unstable, Kai was forced to choose between retrieving the Fangblade or saving Lloyd and eventually chose the latter, leaping across the sea of fire to pull Lloyd to slightly safer ground.

As he shielded Lloyd from the building eruption, Kai had a revelation: his destiny was not to become the Green Ninja but to protect the Green Ninja. The realization caused him to unlock his True Potential, allowing him and Lloyd to escape the volcano as it erupted. When Kai returned to the Destiny's Bounty and reunited Lloyd with Lord Garmadon, he explained how he had unlocked his True Potential, only for everyone to realize the implications for Lloyd. Quickly, the Golden Weapons were held in front of the boy, where they began floating and emitting green electricity between them—to everyone's amazement, Lloyd himself was none other than the Green Ninja.

After Lloyd told the ninja that he wants to go and buy the latest issue of Starfarer, Kai told him that since he is the Green Ninja, he doesn't have time for such childish things.

Garmadon used the Mega Weapon to travel back in time and prevent the ninja from becoming a team, which would in turn prevent Lloyd from becoming the Green Ninja.

After Lloyd was reunited with Misako, she explained that the reason she left was because she knew he was the Green Ninja and she wanted to study the prophecy so that she can prevent the Final Battle from happening.

Misako explained that it is said in the prophecy that the Green Ninja would go to the Temple of Light and that once he finds an instrument of peace, he would strike it, giving him the power of the Golden Dragon.

When climbing the tower that the Garmatron had become in order to get to the Overlord, they encounter a corrupted Nya inside a machine. After Kai offered to deal with her so that Lloyd can get to the top, Lloyd protested and said they can do it together. However, Kai answered that there is only one Green Ninja and that this is Lloyd's fight.

Lloyd mentioned Kai thinking that he was going to be the Green Ninja while talking to him at Yang Tavern.

Kai said that he should have been the Green Ninja when being controlled by the Staff of Elements.

After meeting Lloyd, Morro expressed his annoyance at Wu "choosing" Lloyd to be the Green Ninja.

Master Wu revealed to the Ninja that he had at one time believed that Morro, the Elemental Master of Wind and his original pupil, might become the Green Ninja. Unfortunately, when Wu shared this hope with Morro, it led Morro to develop an arrogant streak. When the Golden Weapons failed to react to him as had been foretold, Morro became furious and set out to prove himself worthy.

After Morro said told the Four Weapon Masters not to let their guard down, Soul Archer told him not to worry and that he will soon be the Green Ninja, and that the Sixteen Realms will be theirs.

As a result of banishing Lloyd to the Cursed Realm, Morro was able to take Lloyd's position as the Green Ninja due to being in Ninjago. However, upon Lloyd's return, the status was contested and eventually returned to Lloyd with Morro's demise.

Lloyd and Harumi speak of the expectations put on them by the roles of Green Ninja and princess respectively, and Lloyd remarks that at least he got to wear a mask.

After suffering from injuries in his fight against his father, Lloyd loses his powers and after waking up, he claims that with no powers, he is no longer the Green Ninja.

After defeating the Oni, Lloyd finds himself in the Grasslands and is greeted by the Golden Dragon, as well as the First Spinjitzu Master. Lloyd bows in respect to meet his grandfather. The First Spinjitzu Master expressed his gratitude and offered to take Lloyd somewhere or to return him to his friends so that he can continue his duties as the Green Ninja, with him gradually forgetting the meeting.

Zane mentions his vision about the Green Ninja to Jay. 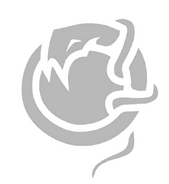 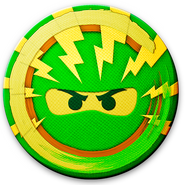 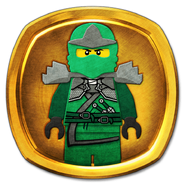 The Green Ninja (right side) as he appears in the Rise of the Snakes mural.

Concept art of the prophecy

In the Season 1 and 2 "Previously on Ninjago" opening. Note these are Kai's eyebrows 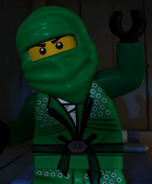