View source
“Everyone, stay together. Kai, you, Nya, and Zane take the high road. We'll make our own road.”
— Lloyd to the ninja, Garmadon, Wu and P.I.X.A.L. in "The Titanium Ninja"

The Curse of the Golden Master
70722 OverBorg Attack

Destroyed
The Green Ninja cycle[1][2] (also known as the Golden Cycle[3] or the green cycle[4]) was a Ninja vehicle used by Lloyd Garmadon. Using his power, Lloyd had the ability to create the Green Ninja cycle. Lloyd first used the cycle while escaping from a group of Nindroids in Hiroshi's Labyrinth, though shortly after he was captured by Pythor.

When Lloyd and Master Garmadon were spotted by Techno Wu and the Nindroids, Lloyd used his Golden Power to create a motorcycle in order to escape from the flying Nindroids in Hiroshi's Labyrinth. When he made it out of the jungle, he was spotted by the Overlord in the MechDragon, threatening to drop Garmadon into the sea, so he left the motorcycle to attack the Overlord but then he is captured by Pythor.

After Lloyd yielded his Golden Power, he used his motorcycle to find Nindroids in the Toxic Bogs. It was seen again later when the Ninja went to Ouroboros to rescue Kai and stop "Project: Arcturus." 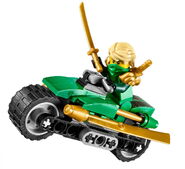