Ninjago Wiki
Register
Don't have an account?
Sign In
Advertisement
in: Ninjago, Ninjago: Masters of Spinjitzu, 2020,
and 15 more
English

View source
watch 01:25
Jurassic World: Dominion Dominates Fandom Wikis - The Loop
Do you like this video?
Play Sound
“I… was a fool. I saw only the things that made us different, not the things we had in common.”
— Gulch to Murtessa, "The Darkest Hour"

Andrew McNee
Chancellor Gulch is the leader of the Geckles.

Gulch overheard both sides and decided to put Zane and Kai into a Trial-By-Mino. They were shocked to see Kai and Zane calm down the Mino, and Gulch decided to make Kai the new Geckle Chancellor. When Kai proposed uniting with the Munce, Gulch laughed at the idea, claiming it that it was a joke.

In an effort to determine whether the Geckles would head to the truce meeting with the Munce, Gulch proposed settling the ordeal with a slug race.

Gulch cheered for the slug which would not allow the meeting, but was disheartened when the grey slug wins. The Geckles then head off to the meeting point.

As soon as they see the Munce, tension rose between the two tribes, and Gulch shows his weapons towards the Munce. When the ninja were able to break everything up, they hear the sound of Grief-Bringer and flee.

Gulch and the rest of the Geckles flee to the Geckle Strong-Cave, where Murtessa helps cuts the chain to the gate. After securing the cave, he begins to argue with Murtessa and the two tribes don't get along. When compromising with the Skull Sorcerer, he and Murtessa argue on who spoke first.

While the Awakened Warriors are trying to destroy the door, Nya spots rocks covering something, so she thinks it's an exit. She then gets everyone to work together to remove the rocks. When they turn out to not be an exit, Gulch apologizes for putting everyone in this situation. Murtessa then apologizes for being harsh to the Geckles and realizes there is some common ground between the two tribes. They then establish trust by Kai and Nya declaring peace with the opposing tribe.

The ninja turn themselves in order to allow the Munce and Geckles to be free, but the Skull Sorcerer double-crosses and captures everyone.

Gulch was working alongside the rest of the Geckles as well as the Munce. When Korgran and Fungus give the signal, they free themselves and fight the Awakened Warriors.

Gulch continues to fight alongside the Upply, Geckles, Munce, and the ninja. After Cole unlocks the Spinjitzu Burst, they all watch Vangelis being apprehended by his former guards.

Gluch watches Vania become the Queen of Shintaro and promises equality for all. He then said his farewells to the ninja before they leave.

While the ninja were fighting the Re-Awakened, Gulch and the Geckles were firing boulders at the warriors using a catapult. However, Gulch broke the final lever and couldn't use the catapult. Zane realized they were in trouble, so he gave up his arm and attached it to the catapult. The Geckles took out most of the warriors, but they were surrounded themselves. Luckily, the ninja helped out by defeating the remaining warriors, and Gulch returned the favor by launching the ninja to the next portal.

His name means "a narrow and steep-sided ravine marking the course of a fast stream."

In the background of a promotional poster for "Master of the Mountain". 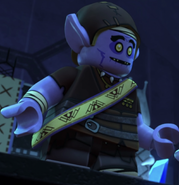