Deceased
Ghost Ninja Hackler was a member of the Ghost Warriors.

Note: Due to all ghost ninja being identical in appearance, it is impossible to determine who is who in the television series. As such, any appearances of a ghost warrior will be cataloged here, regardless of if they are in fact Hackler.

During Morro's confrontation with the ninja in Stiix, he summoned several more Ghost Warriors to attack the ninja. However, they quickly obtained Aeroblades and defeated the ghosts with little to no effort.

Finally free, the Ghost Warriors take over Stiix, turning all of the light sources green. The Ghosts revel in their victory, unaware that the ninja are trying to get the Realm Crystal. Only when they see Nya in Lloyd's gi do the Ghosts try to stop them.

The Ghost Warriors fly around Stiix while the Preeminent is released. When the ninja took out the stilts, the Ghosts helped by making a shield of houses. They later dissolved in the Endless Sea after Nya unlocked her True Potential to drown their master. 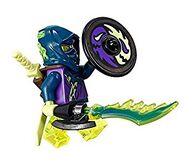 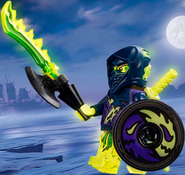