View source
watch 01:25
Jurassic World: Dominion Dominates Fandom Wikis - The Loop
Do you like this video?
Play Sound
“Greetings, honored guests! I am Hailmar. Right hand of King Vangelis. I welcome you to the Kingdom of Shintaro.”
— Hailmar, "Shintaro"

Leader of the Army of Shintaro
Ruler's right-hand man

Hailmar greets the ninja aboard their Destiny's Bounty. He tells the group that they don't allow visitors to Shintaro due to the Dire Bats, but tells them to forget about it and introduces them to the Ivory City.

Hailmar introduces the ninja to Vangelis.

After Vania went after Wu and Cole, Vangelis orders the guards to prison Chompy and makes up a lie to hide the fact that he's the Skull Sorcerer. Hailmar is confused since Chompy is Vania's pet, but Vangelis double downs on his command.

Hailmar discovers Cole in the throne room along with the Upply, Vania, Wu, and Cole. He calls for Cole's arrest after Vangelis ordered him to do so, but Vania tells Hailmar it's all a misunderstanding. However, he doesn't listen and orders his men to apprehend Cole. While fighting, Chompy turns into an enormous dragon and allows Cole and the Upply to flee the throne room. Vania tries to reason with Hailmar, but he charges at Vania.

After Vania was successful in convincing Hailmar, he helps in the fight against Grief-Bringer and the Skull Sorcerer. After arresting Vangelis, he is there when Vania is crowned Queen of Shintaro.

Hailmar is with Vania when she tells him to boost security. Hailmar asks what the "Storm Amulet" is, and Cole replies that it is something that should never see the light of day.

Hailmar and some of the Army of Shintaro attends Nya's memorial. 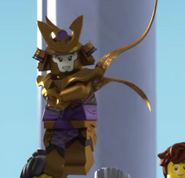