Ninjago Wiki
Register
Don't have an account?
Sign In
Advertisement
in: Ninjago, The LEGO Ninjago Movie, Characters,
and 6 more

Alive
Ham is a citizen of Ninjago City who owns a street food stall.

Ham can be seen in the trailer and the movie when the Manta Ray Bombers fly over Ninjago City. Also his street food stall appears in the city, where he is behind the counter, selling a lady three fish. He can also be seen next to Takuma near the end of the movie when Lloyd talks to Meowthra. 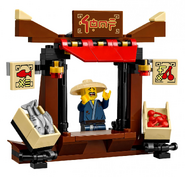 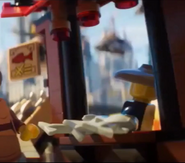 Ham on the left, next to Takuma and near Nancy, N- POP Girl, Chad, and Angler
Community content is available under CC-BY-SA unless otherwise noted.
Advertisement