View source
“Sure it took some getting used to, and it was A LOT heavier than his old scythe, but it seemed very fitting for a Master of Earth wield a hammer.”
— An excerpt, Way of the Departed

Intact
The hammer is a stick with a metal head on top of it and a common weapon and tool in Ninjago. 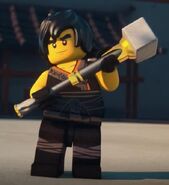