Ninjago Wiki
Register
Don't have an account?
Sign In
Advertisement
in: Ninjago, Ninjago: Masters of Spinjitzu, Ninja,
and 7 more

View source
watch 02:07
Spider-Man: No Way Home Trailer Dropped - The Loop
Do you like this video?
Play Sound
“
Back off, fish sticks!
— Jay in "Long Live the King"
„

At some point, specialized harpoon guns were created to assist the ninja underwater.

Lloyd, Jay, Zane and Nya held their harpoons while they walk to the Hydro Bounty, Jay accidentally shoots his harpoon, making it fall, apologizes and grabs it.

Jay and Lloyd scare off the Ripper Sharks using the harpoons.

Maya used a harpoon to shoot down a Maaray Guard, who was about to attack Ray. Shortly after, Zane, Misako and P.I.X.A.L. used the harpoons to fight off Maaray Guards.

Each ninja has a target on their harpoon - Nya has a golden sai![1] 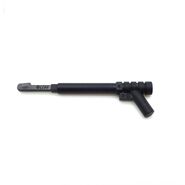