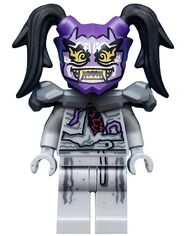 Avatar Harumi
Add a photo to this gallery

Avatar Harumi trading card
Add a photo to this gallery

Harumi as a child playing with Ninja action figures

Harumi's father pushes her into the elevator

Harumi's mother tries to sooth her

Harumi is rescued by paramedics

A nurse tries to comfort Harumi

Harumi refuses to talk, leading to the nurse calling her "The Quiet One."

Lloyd protects Harumi and the Empress

Hutchins introduces the Royal Family to the Ninja

Harumi with her adoptive parents

Harumi compliments each of the Ninja

"The masks must never be reunited."

Harumi thanks the Ninja

Lloyd peeks on Harumi's bedroom as she removes her make up

The Emperor of Ninjago speaks to Harumi

Harumi turns away from Lloyd

A sad Harumi looking at her photo with the Royal Family

Harumi kisses Lloyd on the cheek

Harumi revealed as the Quiet One

Harumi wearing the Oni Mask of Hatred during "Game of Masks."

Harumi and Lloyd finding the Mask of Hatred.

Harumi trying to grab the Mask of Hatred

Harumi tells Lloyd of her damsel in distress facade.

Harumi calls out to Lord Garmadon

Harumi receives an answer from Garmadon

Harumi passes out as the Ninja manage to stop the ritual

Harumi wakes up to find the Ninja surrounding her

Harumi wakes up as the police approaches her

Harumi with the police

Harumi is taken away

Harumi about to be taken away to the police station

Lloyd tries to speak to Harumi

Lloyd restraints Harumi instead of hitting her

Harumi explains why Mr. E failed on his mission

With Killow, Luke Cunningham, and a Sons of Garmadon member

Harumi waits for the elevator, unaware that The Resistance is sneaking behind her

Harumi at the elevator

Harumi takes the elevator, unaware that Paleman is following her

"Time to take out the trash"

Harumi has seemingly lost the respect of the generals

Harumi accepts her share of guilt over the message incident

Harumi fears for her life

Harumi pleads for Garmadon to spare her

As a last resort, Harumi reveals she knows the location of The Resistance's hideout

Harumi recuperates after being nearly strangled to death

Garmadon demands Harumi tells him where the Reisistance's hideout is

Harumi goes to look for Garmadon

Harumi walks through the temptle

Harumi bows to Garmadon while she awaits his answer

Garmadon embraces Harumi as his "daughter of darkness"

Harumi and the SOG search for Lloyd

Harumi allows Killow to throw a citizen into the canal

Now on her own, Harumi walks through the street unaware that Lloyd is right next to her

Harumi searches for Garmadon at the Temple of Resurrection

Dareth rejects her offer and tries to gag her

Harumi manages to escape and return to Garmadon

Garmadon welcomes his "daughter" back

Harumi smiles triumphantly at Mistaké once her cover is blown

Realizing the tables have turned, Harumi panics and decides to escape

Harumi is distracted by the cries of a child

Harumi sees a boy about to lose his parents

Harumi realizes what she has done

Harumi saves a boy and his parents

Harumi guides the family towards the exit

A mother thanks Harumi for saving her family

Harumi's first genuine smile in years...and the last one.

Harumi seconds before her death

Harumi's village is attacked by the Skulkin

Harumi and her birth parents celebrate 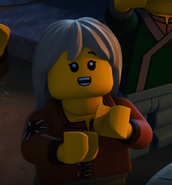 Harumi as a child in Tales from the Monastery of Spinjitzu
Add a photo to this gallery
Retrieved from "https://ninjago.fandom.com/wiki/Harumi/Gallery?oldid=396518"
Community content is available under CC-BY-SA unless otherwise noted.