Ninjago Wiki
Register
Don't have an account?
Sign In
Advertisement
in: Non-canon, Shadow of Ronin, Characters without a minifigure,
and 7 more
English

View source
watch 02:24
Wiki Targeted (Entertainment)
Do you like this video?
Play Sound
“
So who are you? What do you want? Why are you here? How do you know Ronin? Why should I trust you? Where—
— Hibiki to the ninja
„

TBD
Hibiki is the paranoid original owner of the Obsidian Glaive and a current inmate at Kryptarium Prison.

Hibiki originally owned the Obsidian Glaive, but it was at one point stolen by Ronin.

Shortly after the ninjas' memories were wiped by Ronin, they traveled to Kryptarium Prison, seeking Hibiki's help. When they arrived, they found the prison under attack by Ronin's samurai. Mistaking the ninja for more of Ronin's goons, Hibiki fled through the prison until the ninja fended off the Samurai. Once he was convinced that they were victims of the Obsidian Glaive, Hibiki provided them a map to the Inky Lemonberry in the Toxic Bogs, which they could use to make a Tea of Insight that would enable them to learn the location of the Obsidian Weapons.

Talking with the ninja 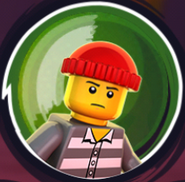 In Shadow of Ronin
Deutsch Polski
Community content is available under CC-BY-SA unless otherwise noted.
Advertisement